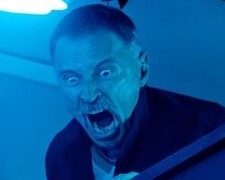 If you find a list of the greatest British films of all time, it’s likely that you’ll come across Trainspotting.  Released in 1996 and directed by Danny Boyle, it was the tale of 4 young guys and their drug fuelled adventures across Edinburgh.  Mixing both hilarity and tragedy, this hard-hitting film has stuck in the minds of many.

There’s been no shortage of demand for a sequel but it’s been a long road to get to this point.  Director Danny Boyle (Slumdog Millionaire) and star Ewan McGregor (Moulin Rouge!) has a public falling in out in 2000.  Boyle has promised McGregor the leading role in The Beach but had a change of heart and went with Leonardo DiCaprio instead.  It was more than a decade before the rift was healed.

One might hope that these characters have learned the errors of their ways and are now fully functioning members of society.  Sadly, that’s not the case.  Franco (Carlyle) has spent the last 20 years in prison and is back on the outside after a cunning escape.  Sick Boy (Miller) is still a drug addict who now runs a profit-less bar.  Spud (Bremner) has nothing left in his vapid life and is on the verge of suicide.  Renton (McGregor) moved to Amsterdam and got married but is reassessing his situation after a near-death experience.

Knowledge of the original film isn’t essential but it would be a helpful pre-requisite.  There are numerous references the past jokes and events such as a scene where Ewan McGregor creates an updated version of the infamous “choose life” monologue.  The narrative will also make more sense too.  Renton ran off with £16,000 at the end of Trainspotting and a major theme in this sequel is the revenge sought by those he wronged.

While it’s great to catch up with these eclectic characters, the screenplay is slight.  The first movie was 30 minutes shorter and yet it feels like it covered twice as much material.  The unusually titled T2: Trainspotting gives each of the characters their own key subplots but they don’t add up to a free flowing film.  As an example, Kelly Macdonald and Shirley Henderson reprise their roles from the original but their scenes are short and pointless.  They’re nothing more than glorified cameos.

Twenty years is a long time between drinks (and heroin shots) so it’ll be interesting to see how audiences react to this unexpected reunion.