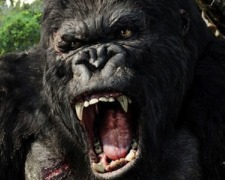 In case there was any confusion, this film has nothing to do with the King Kong released in late 2005.  That was directed by Peter Jackson (with Australian Naomi Watts in the lead role) and was fairly faithful remake of the 1933 original.  This is part of a new “monster” franchise that will culminate in 2020 with Godzilla v Kong.  I can only hope it’s better than Mega Shark vs. Giant Octopus.

Given the reboot, time is needed to introduce a fresh group of characters.  Bill Randa (Goodman) leads a secret government organisation that wants to set foot on the last unexplored piece of land on the planet, Skull Island.  People laugh at his crazy conspiracy theories but he believes it is home to giant lifeforms that live below the surface.

The year is 1973 and events take place in the days following the end of United States involvement in the Vietnam War.  With Skull Island located in the South Pacific, Bill gets permission to the military’s resources to get his team there safely.  Lieutenant Colonel Preston Packard (Jackson) leads the helicopter squadron and is excited about one final mission before his tired men head back home to the States.

Others along for the ride include James Conrad (Hiddleston), a British pilot who has been engaged for his “tracking” abilities, and Mason Weaver (Larson) a photojournalist who is curious about the mysterious mission and what they may find.  There are other scientists and military folk but given they are played by largely unknown actors, you can expect most to meet a quick demise.

Kong is the first creature they come across – a giant beast who wastes no time in defending his turf.  John C. Reilly, who plays a WWII pilot trapped on Skull Island for 28 years, sums it up best when saying “you don’t go into someone’s house and start dropping bombs unless you’re picking a fight.”  Packard and his crew attack Kong but it ends badly.  The helicopters are destroyed, the body count is high, and those that survive are unsure how to get to the agreed-upon rescue point.

It gets worse.  It turns out that Kong is one of the least dangerous creatures on the island.  There’s an assortment of giant spiders and lizards that will jolt many in the audience.  It’s here where the amazing work of cinematographer Larry Fong (Watchmen) and the visual effects artists is most evident.  They’ve created a claustrophobic world and put these characters in a situation where escape feels impossible.  It’s not for the squeamish.

The strong visuals are offset by a disappointingly dull screenplay.  There are far too many characters to develop fully and even the big names don’t seem to get enough attention.  Oscar winner Brie Larson (Room) just walks around taking photographs and Tom Hiddleston (Thor) just keeps pointing people in the right direction.  The only two who entertain are Samuel L. Jackson (Pulp Fiction) as the gun-loving colonel and John C. Reilly (Chicago) as the lost, semi-deranged pilot.

The contrived actions of these characters are also frustrating.  It brings back memories of goofy horror films where people do the exact opposite of what they should (so as to prolong the narrative).  Why do they agree to split up and head into hazardous territory for no logical reason?  There are also scenes where they narrowly escape a life-and-death situation and then, for whatever reason, shrug it off and forget the danger as if it’s a non-event.