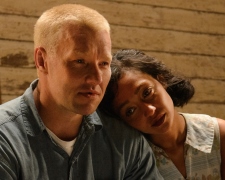 While it’s not particularly creative, the title of Jeff Nichols’ new film does serve two purposes.  Most obviously, it signifies this is a love story.  It’s a drama about two people who want to spend the rest of their lives together.  Secondly, it is referring to the characters’ names.  It is based on the true tale of Richard and Mildred Loving – a couple who played a small but important part in America’s history.

Spread over several years, the film begins in 1958.  Richard (Edgerton) and Mildred (Negga) are a young couple from Caroline County, Virginia.  He works as a labourer and she is pregnant with their first child.  Not yet married, the two travel to Washington D.C, obtain a marriage licence and return back home.  Richard has found a nice piece of land and is keen to build a house for his wife and future children.

While it all may sound very simple and idyllic, there’s a catch.  Richard is a white man and Mildred is a black woman.  Virginia has laws which prevent inter-racial marriage.  Police storm into their bedroom one night and take them both into custody.  The authorities proclaim they have not just broken the written law but they’ve also acted against “God’s law” by sleeping together and bringing a mixed-race child into the world.

We’ve seen movies that recount true stories of the civil rights movement.  Examples include Mississippi Burning, Malcolm X, Ghosts of Mississippi, The Help, The Butler and Selma.  Those films are filled with heroic characters that have changed the world.  The same applies in Loving but what’s most striking is the reluctance of its two leading characters.  They didn’t like the law but they didn’t have the courage (and money) to retaliate.

They weren’t imprisoned for their marriage but the judge essentially banished them from the state for 25 years.  They had to say goodbye to their family, friends and colleagues and try to start a new life in Washington D.C.  It was hard but they did their best to make it work.  In 1964, Mildred wrote a letter to Attorney General Robert F. Kennedy pleading for assistance.  Her request was granted and she was allocated a free lawyer by the American Civil Liberties Union who would help appeal the original judge’s decision.

That’s all I’ll say on the plot so as not to spoil the ending for those unfamiliar with this famous legal case.  Ruth Negga (World War Z) picked up an Oscar nomination for her performance and she is wonderful as the quiet, reserved Mildred who slowly finds the nerve to fight back against the system that wronged her.  Australian Joel Edgerton (Warrior) brings similar personality traits to his character (he’s even more passive) and is also very good.  They’re not a talkative, laughable couple but get a clear sense of the love and affection they share.

38-year-old writer-director Jeff Nichols is quickly building an impressive resume with this following in the footsteps of Take Shelter, Mud and Midnight Special (all released in the past 5 years).  Rather than fill this movie with courtroom sequences, he takes the opposite approach and focuses largely on the relationship between Richard and Mildred.  Nichols rationale is logical – if you see how beautifully and simply these two love each other, how is their right to be married even worth arguing?  Why do we even need dramatic scenes involving judges and lawyers?

At a time when an increasingly level of fear is being generated by political leaders, Loving reminds us how much have things have changed over the past half-century and what we need to keep protecting.