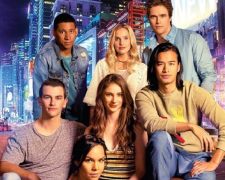 Dance Academy was a fictional television drama that debuted on the ABC back in May 2010.  It was targeted at teenagers and followed the ups and downs of high school students who were part of the National Academy of Dance in Sydney.  A total of 65 episodes were produced and the show wrapped up in mid-2013.  It twice won the Logie Award for the best children’s program.

On hearing that this new movie was being made, the first question I asked was “why?”  It’s not often that an Australian television series makes the move to the big screen.  The answer to that question comes from beyond our shores.  The Dance Academy audience has grown over the past few years with the show sold to several international markets including the United States.  Creators Samantha Strauss and Joanna Werner felt there would be enough people interested in catching up with these characters once again.

As someone completely new to the show, I will look at this film differently to most paying customers.  I don’t know the backstory to these characters and their intricate connections.  A “newbie” can enjoy this as a standalone feature but it’s clear that fans of Dance Academy will pick up on a lot more.  Almost all of the featured actors from the later episodes of the television series have returned.

The opening to the film paints a gloomy picture.  The main protagonist, Tara Webster (Goodwin), has given up on a career in dance following a major injury.  She’s been speaking with a lawyer and is considering legal action against the National Academy of Dance for their poor training and unsafe workplace.  To help make ends meet, she now works as a barista in a small café located in the foyer of the Sydney Opera House.  Seeing the successful ballet dancers walk past each day only adds to her sullen disposition.

There is light at the end of the tunnel and with her injury showing signs of improvement, Tara will get another chance to follow her dreams.  She is approached by the head of the Academy, Madeline Moncur (Otto), and asked to re-audition.  That doesn’t work out but it sets in motion a series of events that will take her first to New York and then later to Texas (an obvious attempt to appeal to the American audience).  She catches up with old friends and is presented with new opportunities.

There’s a realness to these characters and their journey that makes this worth a look.  It’s not all “rainbows and sunshine” and the film highlights the difficulties one faces in trying to pursue a career in the arts.  You give up any chance of a social life and you have to practice all day, every day with the hope you will land one of the few great jobs on offer.  For every person that succeeds, there’s at least one hundred who fail.

The film also delves into other areas including the idea of “celebrity”.  One of Tara’s good friends, Kat (Banit), has become a quasi-icon in the U.S. but things become unstuck as a result of a social media scandal.  The narrative also touches on the way in which friendships become harder to maintain as careers move in different directions.

The screenplay does succumb to predictability in the final act.  Writer Samantha Strauss has made some safe, audience-friendly choices that aren’t as adventurous as the lead up.  Fans won’t be too perturbed.  With a wide mix of songs and an eclectic group of characters, Dance Academy: The Movie will appease the target crowd.

You can read my interview with director Jeffrey Walker by clicking here.