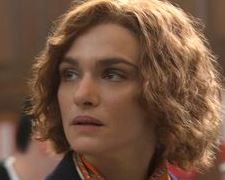 “Fake news” has been a hot topic of conversation over the past year and so the release of Denial couldn’t be better timed.  It takes us behind the scenes of court case that became front page news in the United Kingdom in the late 1990s.

The film begins in 1994 with Professor Deborah Lipstadt (Weiz) promoting the release of her new book, Denying the Holocaust: the Growing Assault on Truth and Memory.  As the title suggests, she takes aim at those who lie and distort the truth for their own personal benefit.  She criticises the writings of “historian” David Irving (Spall) who believes that Jews were not murdered at Auschwitz and that even if they were, Adolf Hitler had no knowledge of it.

Two years later, Irving filed a libel suit in the United Kingdom against Lipstadt and the publisher, Penguin Books.  It sounds rather farcical but Lipstadt soon realises that she faces a battle.  Under UK law, there’s no presumption of innocence and the burden of proof rests with the accused.  Lipstadt has to provide sufficient evidence that the Holocaust occurred and that Irving had knowingly twisted historical information to suit his political and ideological beliefs.

A significant chunk of the film is spent following the lead up to the trial.  Friends suggested that she settle out of court because such a trial would be giving Irving free, unjustified publicity to further spout his claims.  Lipstadt understood that logic but felt compelled to clear her name.  She engaged the services of renowned solicitor Anthony Julius (Scott) and barrister Richard Rampton (Wilkinson) to help as part of the defence.

These three didn’t always see eye-to-eye on strategy.  As an example, Julius wanted to keep Lipstadt off the witness stand and out of the media during the trial.  This was to keep the focus on Irving and his flawed writings.  Lipstadt strongly disagreed.  She wanted the chance to speak up against what she believed was a frivolous lawsuit that had impaired the reputation of herself and actual Holocaust survivors.

Those looking for insight into the inner workings of a major court case should find lots to take away from this.  Oscar-nominated screenwriter David Hare (The Hours, The Reader) shows that while truth is important in any trial, the strategy adopted by the solicitors and barristers can have just as much of an impact on the outcome.

There’s also a “greyness” to the characters with each having their strengths and weaknesses.  Rachel Weisz (The Constant Gardener) illustrates this through her performance as Lipstadt.  Her strong-willed nature and American view of the world clashes doesn’t always align with those of her UK defence team.  You want to see her win the case but you also understand that some of her actions aren’t helpful.

As a good historical drama should, Denial is the kind of movie that makes you want to do more reading about the subject as you’ve left the cinema.