Review: The Fate of the Furious 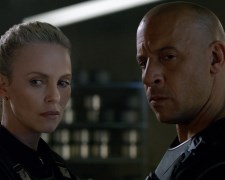 Just like the cars in these movies, The Fast and the Furious franchise is showing no signs of slowing down.  It’s been 16 years since the release of the original and the seven previous instalments have grossed just under $4 billion USD at the worldwide box-office.  One can only assume that these characters will still be pulling off daring robberies and elaborate escapes as 80-year-old pensioners.  I can’t see them stopping any time soon.

Directed by F. Gary Gray (Straight Outta Compton), the least interesting component of The Fate and the Furious is its plot.  To sum it up in a single sentence, the villain gets their hands on a nuclear weapon and works with some folk in Russia to help detonate it.  It’s reminiscent of so many other action films and I was surprised that writer Chris Morgan didn’t strive for something more original.

That’s not to say the film isn’t watchable.  There are some great action pieces that can be enjoyed.  My favourite was a car chase sequence involving driverless cars that had been “hacked”.  It’s amazing what pandemonium you can cause on the streets of New York when controlling thousands of cars at once.  Other highlights include another car chase across a frozen Russian lake and a gun fight where an ear-muff wearing infant is caught up in the mayhem.  They win points for creativity.

The villain is critical to the success of any action film and Charlize Theron earns praise for her performance as a cyber-terrorist looking to impart her views on the rest of the world.  She’s part genius, part psychopath and her cunning nature ensures she continually has the upper hand.  She blackmails the film’s protagonist, Dominic Toretto (Diesel), and uses him to help steal the aforementioned nuclear weapon.

The film’s other standout is Helen Mirren but her appearance is far too brief and fleeting.  It’s barely a cameo.  Her hilarious character makes you realise that other members of the cast aren’t all that interesting.  Tyrese Gibson is striving too hard for laughs, Kurt Russell and Scott Eastwood rabble on too much, and Michelle Rodriguez is given very little material to work with.  Hopefully we see more from Mirren next time around.

There’s not a great deal of tension in the film despite its heavy nature.  Those who have seen the earlier films will be familiar with the same themes being drummed home.  The word “family” is repeated so often that it feels like a TV commercial for a political party.  It’s about putting the lives of your friends and family ahead of your own.  It’s why Toretto is prepared to risk the lives of millions to save just one – a conclusion that doesn’t make a lot of sense in the real world.

The cast members will have been rewarded with nice pay checks but The Fate of the Furious is a few steps below the best in this franchise.