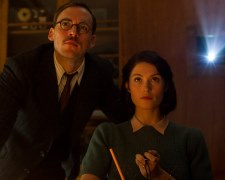 It’s one of the most analysed events in movie history and World War II is back in the spotlight with Their Finest, the latest from Danish director Lone Scherfig (An Education).  The characters are fictitious but the screenplay taps into events that did take place during the war.  Don’t expect any major battle scenes though.  Based on the dramatic novel by British-born Lissa Evans, the film delves into a part of the war that many will be unfamiliar with.

To help get messages out to the wider public during WWII, the British Ministry of Information produced “informationals”.  They were short films that screened in cinemas (often in between a double feature) that helped lift spirits and educate the nation.  Some were about providing basic facts, like what to do when hearing air raid sirens, whilst others were more uplifting, such as a fictitious short story about a heroic Brit saving his fellow soldiers.

Catrin Cole (Arterton) is a young Welsh woman who has landed a job with the Ministry to help with these propaganda films.  Her main job is to write the “slop” – a harsh word referring to the dialogue uttered by the female characters.  Her views are often ignored and it’s clear she’s not respected by her male counterparts.  Sharing a theme with the recently released Hidden Figures, she’s a woman trying to break down barriers in a male dominated workplace.

The crux of Their Finest is spent following one film production in particular.  The Ministry has gone with a change of tact and has agreed to fund a full length feature.  It’s loosely based on an actual story and is about a soldier who helps rescue others during the Dunkirk evacuation in 1940.  The Ministry’s hope is that young Brits will be inspired by the tale and will enlist in the army.  They also hope it will provide comfort to the broader population that the war will indeed be won.

Catrin is at the centre of all the film’s key subplots.  We are provided insight into the fractured relationship she shares with her husband (Huston) who doesn’t react well to his wife being the sole breadwinner.  We see her argue and battle with her male co-writer (Claflin) as the propaganda films take shape.  We also watch her interact with a self-absorbed actor (Nighy) who isn’t too open to criticism.

Their Finest isn’t too heavy and I can see audiences reacting positively to the “lighter” touch.  The most interesting element is its setting.  We go behind the scenes on the production of a war propaganda film and see some the decisions, rightly or wrongly, that are made along the way.  They are described to Catrin as “real life with the boring bits left out.”

Some won’t be phased but I was a little disappointed by the final act.  Despite the intriguing setting, it becomes a fairly conventional love story.  Catrin’s great work, so much a focus during the first two-thirds, is pushed into the background.  There’s also a poorly written twist that doesn’t generate the emotional impact it should.

The performances are largely very good.  Gemma Arterton (Clash of the Titans) impresses as the film’s strong, opinionated leading lady.  You can see her character’s confidence build through each passing scene.  Bill Nighy (Love Actually) confirms his reputation as a scene stealer with his performance as the prickly actor with a softer interior.  Jake Lacy (Carol) also wins laughs as an American “actor” who been included in the Dunkirk film solely for political reasons.

Mixing a range of genres, Their Finest is a likeable crowd-pleaser that offers drama, comedy and romance.