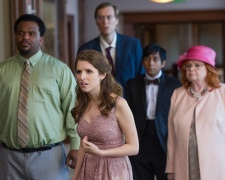 Those that have planned a wedding will know one of the more challenging aspects is the table seating at the reception.  You’re bringing together a wide range of people from different families and different backgrounds.  Who do you put around each table to ensure a fun, happy, chatty evening ensues?  Who do you have to keep separate for reasons that are best not divulged?

This appears to be the concept from which Table 19 was born.  The film takes place over a day and follows 6 people who have been seated together at a wedding.  They’re been positioned in the back corner – as far away from the main table and the dancefloor as is possible.  That sums them up.  They’re noted on the planners map as the “randoms” – those people who were invited to be polite but should have known better than to RSVP.

Heading the table is Eloise (Kendrick).  She was once best friends with the bride but their relationship soured after Eloise had a falling out with the bride’s brother (they’d been dating for 2 years).  Jerry (Robinson) and Bina (Kudrow) are a long-married couple stuck in a tired relationship.  Jo (Squibb) is a former nanny who has been invited out of spite.  Walter (Merchant) is a convicted criminal who stole $125,000 from his uncle’s company.  Renzo (Revolori) is an awkward youngster who thinks of himself as a “ladies man” but has no idea what he’s doing.

Over the course of the evening, they open up to each other about their respective backgrounds and problems.  This isn’t like Wedding Crashers or Bridesmaids where the writers use slapstick and farcical scenarios to create laughs.  This is a little more subtle and there are several moments that are attempting to tug at the heartstrings.

Things don’t always work out the way that we expect.  That’s a message within the film… and also a message about the film.  Director Jeffrey Blitz earned an Academy Award nomination in 2002 for one of my all-time favourite documentaries, Spellbound, and he later went on to win an Emmy for directing an episode of The Office.

The guy has talent but I have to be blunt – this is a mess of a film.  With a running time of just 87 minutes, it looks like it’s been chopped up in the editing room.  Characters jump between scenes far too quickly and the ending is rushed.  Our six protagonists leave the wedding reception several times during the film but Blitz, for whatever reason, keeps zipping back to the reception to see unimportant characters doing quick, dumb things (such as a drunk karaoke singer).

There’s a lot of talk at Table 19 but there weren’t many laughs in Cinema 4.