Review: Guardians of the Galaxy Vol. 2 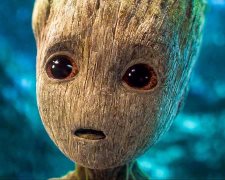 A battle is being waged within the Marvel universe.  That battle is to win laughs.  After some heavier material, the scales have shifted back in favour of comedy with Guardians of the Galaxy in 2014 and Deadpool in 2016.  Thoughts on these films will vary depending on one’s sense of humour.  Some love the spoof-nature of Deadpool while others prefer the insult-laden screenplay in the Guardians franchise.

Few chances have been taken in this follow up from writer-director James Gunn.  It’s the same characters making the same kind of jokes.  To provide a quick background check, there are five eccentric individuals who have formed a strange partnership to help save the world.

Peter (Pratt) is an Earthling who loves music from the 1970s and 80s, Gamora (Saldana) is an alien orphan with a troubled past, Drax (Bautista) is a quasi-monster with superhuman strength, Rocket (Cooper) is a genetically-engineered raccoon with a filthy mouth, and Baby Groot (Diesel) is a small talking tree with a very limited vocabulary.

The premise of this second film is slow to reveal itself.  It begins with Peter learning that his father is a mysterious alien being named Ego (Russell) who thinks of himself as a God.  He’s even created his own paradise-like planet where he spends most of his time.  There’s a bit of father-son bonding time and the Guardians also get to meet Mantis, a close associate of Ego who has the ability to “read” emotions.

With no villain established in the opening hour, it falls upon the Guardians to be their own worst enemy.  They’re asked to protect a highly-advanced alien race from a large monster intent on destroying them (it provides for a cool opening title sequence).  The job goes smoothly until Rocket takes it upon himself to steal several batteries that were considered valuable to the local people.  There’s now a deserved bounty on their heads.

The story isn’t as strong this time around but these characters have won me over with their charm and spirit.  They have a distinct lack of social skills and this alone provides for many laughs.  Drax and Rocket verbalise whatever thoughts run through their heads (even when they shouldn’t) and Peter and Gamora try to put up with each other’s insults despite the obvious sexual tension.  Groot is the most loveable of the bunch but his low-IQ makes him a hindrance as much of a help.

With the focus on character interaction (rightly so), the action sequences are kept short and sharp.  The many subplots come together in the final hour and the narrative finally starts to makes sense.  Don’t expect everything to be resolved neatly.  Five closing scenes, spread throughout the closing credits, create intrigue about what may happen in future films.

Featuring another broad soundtrack and a few funny pop culture references (even Mary Poppins gets a mention), Guardians of the Galaxy Vol. 2 entertains and keeps the franchise on the right track.