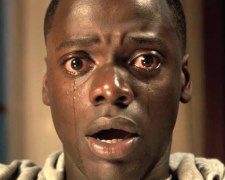 I love a good underdog story and the behind-the-scenes tale of Get Out ranks very highly. Three years ago, African American comedian Jordan Peele was the creator and star of a Comedy Central show entitled Key & Peele.  It was well-regarded by critics, popular with the public, and ultimately won an Emmy Award for the best variety sketch series (in 2016).

Its success provided a confidence boost to Peele and I’m sure it provided the motivation to take the next step in career – feature films.  After mulling over a few ideas, he settled on the concept for Get Out and pitched it to several production companies.  He expected to get knocked back but QC Entertainment and Blumhouse Productions, who have a strong track record with low-budget horror, agreed to put up just under $5 million to see made.

Their support for Peele’s project has paid dividends, both literally and metaphorically.  Since its release in the United States in late February, Get Out has made $170 million at the local box-office.  That number will grow when the film is released more widely overseas.  It is the biggest box-office in history for an original story from a first-time writer-director.  The fact that Peele is an African American, a group underrepresented in Hollywood, only adds to the impressiveness of that achievement.

So is the hype justified?  The answer is a clear yes.  Word-of-mouth has fuelled the film and put plenty of bums on seats.  It opens with Chris Washington (Kaluuya) and his girlfriend, Rose Armitage (Williams), preparing to take a weekend trip into the countryside to meet her parents for the first time.  Given that he’s black and she’s white, Chris is a little nervous as this information hasn’t yet been passed onto Rose’s parents.  She assures him they’re not racist and he has nothing to worry about.

After a lengthy road trip, they arrive and introductions take place.  Mr Armitage (Whitford) is a surgeon, Mrs Armitage (Keener) is a renowned hypnotherapist, and Rose’s brother (Jones) is a medical student.  They seem like a normal American family, albeit rather wealthy.  Chris will get to meet dozens more people the next day when the Armitage’s host their traditional annual get-together.  It’s a large, extravagant party where neighbours and old friends catch up over good food and good wine.

Chris goes into the weekend with an open mind but he soon realises that something is askew.  Everyone is acting a little too polite.  He feels even more uneasy when the party guests arrive, almost all of whom are white.  A stranger strikes up a conversation with him about golf and is quick to mention the greatness of Tiger Woods.  Chris can’t work out if the man is being sincere or if the strange discussion is an attempt to mask his racist tendencies.

That’s about all I’ll reveal in terms of the narrative as the film has many twists and turns.  Get Out is an unorthodox horror-thriller that could be game changer for the genre.  Instead of frightening the audience with blood, violence and creepy noises, Peele puts you on edge by having to listen to the unsettling conversations shared between Chris and the other characters.  You’ll struggle to understand anyone’s intentions, at least during the first two acts, and that adds to the film’s ominous nature.

28-year-old British actor Daniel Kaluuya (Skins) is terrific in the leading role and is well supported by his fellow cast members.  The pick of the cast is Lil Rel Howery who breaks up the tension with some well-timed comedy.  He plays a friend of Chris who works for the Transportation Security Administration and the two chat several times over the phone across the course of the weekend.

Horror-thriller films don’t have a great track record at the Australian box-office but when word starts to spread here about Get Out, I think a lot of people are going to be seeing one of the year’s most interesting films.