Review: Pirates of the Caribbean: Dead Men Tell No Tales 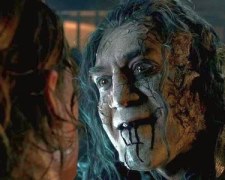 It’s been a bumpy voyage for those involved with this latest instalment of the Pirates of Caribbean franchise.  I’m referring to more than the characters.  The studio executives, producers and crew members have also been put through the ringer.  Script problems delayed the process for several years and there were also worries about the huge budget.  Poor reviews plagued the 4th film (On Stranger Tides) and questions were asked about whether there was sufficient demand for this fresh outing.

The Swedish directing duo of Joachim Rønning and Espen Sandberg, both of whom were responsible for the Oscar nominated Kon-Tiki, expressed a desire for this series to return to its roots.  They wanted to create something fun and exciting in the same vein as the 2003 original, The Curse of the Black Pearl.  I’m not convinced they’ve achieved that but you can see than an effort has been made to create an interesting story as opposed to relying solely on special effects and a goofy Johnny Depp.

One could argue that Depp is a supporting player in Dead Men Tell No Tales.  The stronger story involves two youngsters – Henry (Thwaites) and Carina (Scodelario).  He is the son of Will Turner and he seeks the long-lost Trident of Poseidon so that he can break a curse that keeps his father trapped permanently at the bottom of the sea.  She is a sharp scientist who wants to prove that magic isn’t real through her study of astronomy and horology.  It should come as no surprise that these two fall in love throughout their adventures together.

Trying to put a stop to their efforts is Captain Armando Salazar (Bardem).  He was once a successful pirate hunter but now finds himself trapped in a giant cave (referred to as the Devil’s Triangle).  A curse prevents him from escaping and so he too is looking to get his hands on the Trident with the help of the always shifty Captain Barbossa (Rush).

So where does Captain Jack Sparrow (Depp) fit into all of this?  He starts out with no luck, no ship and no crew but ends up doing what he does best – drinking rum, stumbling through dangerous scenarios, and playing everyone off against each other.  It’s hard to be too enthused by Depp's performance since he’s delivering the same repetitious material from the earlier films.  The film is far more entertaining when he’s off screen.

One can’t help but think this franchise is reaching its conclusion.  It hasn’t been able to sustain its momentum to the same extending as Star Wars (offering more story) or The Fast and the Furious (offering more creative action).  It’s a watchable blockbuster but not one that is particularly memorable.

You can read my chat with star Geoffrey Rush by clicking here.