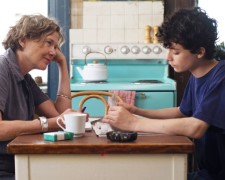 Mike Mills developed a love for punk rock growing up in the 1970s and 1980s.  That passion helped shape the early years of his working career.  He designed album covers and directed music videos for bands including the Beastie Boys, Sonic Youth and Air.  He also directed television commercials to keep a steady income rolling in.

He had always hoped to transition into feature filmmaking but wasn’t quite sure how to go about it.  After making the little known Thumbsucker in 2005, Mills tapped into his own life and struck oil in 2010 with Beginners.  It told the story of a 75-year-old widowed man who, despite being married for 44 years, reveals to his middle aged son that he is gay.  It won Christopher Plummer an Academy Award for his incredible performance.

Mills continues his theme of drawing from personal experience with 20th Century Women.  This time around, the focus is squarely on his mother.  The lead character is a 55-year-old Dorothea Fields (Bening), a single mum trying to raise a 15-year-old son, Jamie (Zumann).  The way she acts, the way she dresses and the way she smokes is mirrored from Mills’ own mother who passed away in 1999.  He even had Bening wear her mother’s actual jewellery.

The film takes place over a short period in 1979 and beautifully observes the relationship between mother and son.  Jamie is at a slightly rebellious age and describes his overbearing, inquisitive mother as “sad and alone”.  Dorothea is worried that her son might be “slipping off the rails” and she asks a group of friends for assistance.

Abbie (Gerwig) is an artist with big dreams but is struggling to find her place in the world.  Julie (Fanning) is a promiscuous teenager who yearns to be close to someone spiritually and not just physically.  William (Crudup) is the only male in the mix and is a financially-struggling carpenter who is helping fix up their rundown home.

Mills has created an incredible, heart-warming drama.  I could listen to these characters talk and watch them interact for hours.  They don’t go through any remarkable transformation.  We simply observe their lives and appreciate the complexity of who they are.  They share deep conversations, provide laughs, and offer unexpected support when times get tough.

Narration is sometimes described as “lazy filmmaking” but Mills uses the technique perfectly.  Each featured actor gets a chance to narrate and in doing so, they provide insight into their character’s past and future.  It helps you realise that life is full of wonderful moments but their value to us and our memory of specific details does change over time.  This isn’t a tear-jerker but there are many powerful moments of reflection.

Overlaying all the drama is Mills’ clear admiration for the era in which the film is set.  Jamie develops a love for alternative music, much to the concern of his mother.  There’s a humorous scene where Dorothea and William listen to a song for the first time and try to put their own spin on the lyrics as middle-aged adults.  There’s another great moment at a dinner party that I won’t spoil.

Nominated for best original screenplay at this year’s Academy Awards, 20th Century Women is a movie I could watch again and again.  If it’s not the best film of the year, it’ll be damn close.