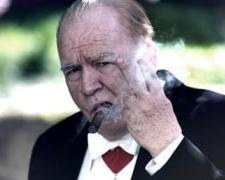 I’ve been keeping a running tab of all the cinema releases in 2017 that have been set around World War II.  It’s only June but on the list so far are Alone in Berlin, Land of Mine, Their Finest, The Innocents and The Zookeeper’s Wife.  It highlights our fascination with that particular war above all others.

The next film to be added to the list is Churchill – a British production from Australian director Jonathan Teplitzky (Gettin’ Square, The Railway Man).  You won’t see any battle scenes here.  Rather, the film is told from the perspective of British Prime Minister Winston Churchill (Cox) as he prepares for the Allies invasion of Normandy, France in June 1944.  It’s more commonly referred to as D-Day.

As the film begins, plans are well underway for Operation Overlord (the code name for the Normandy attack).  All the finer details had been agreed.  Both the British and American generals were ready to send thousands of troops into battle.  It’s worth noting that representing the American side was General Dwight D. Eisenhower (Slattery) – the man who would become the U.S. President less than a decade later.

It seemed only one thing was going to stop the operation – Winston Churchill.  With less than 3 days to go, he expressed his disapproval for the plans and was worried about the huge loss of life that the allies would suffer.  His views were not respected and this infuriated Churchill.  He wasn’t happy with the Americans coming in and telling him what to do.

The film spends much of its running time delving into Churchill’s psyche and explaining why he acted the way he did.  He was almost 70-years-old at the time and had been suffering from illness and depression.  The length of the war had taken its toll.  The body count was growing and public morale within his country was weakening.  His loyal wife (Richardson) worked tirelessly to boost her husband’s spirit while also acting as a valuable confidant.

The screenplay also suggests that Churchill’s opposition to the D-Day plans was heavily influenced by his experiences during World War I – where he served as First Lord of the Admiralty.  He resigned from his post that 1915 after being held responsible for the disastrous Gallipoli Campaign.  The fact that the Normandy attack involved similar amphibious landings made Churchill uneasy.

Teplitzky’s film offers a different insight into Churchill.  Screenwriter Alex von Tunzelmann is a British historian who had previously written articles for The Guardian on the historical accuracy of films such Bridge of Spies, Suffragette, The Danish Girl and Selma.  She now finds herself under the spotlight with other historians, academics and politicians describing this film as a character assassination.  Andrew Roberts, a journalist who has written extensively about Churchill, said “The only problem with the movie … is that it gets absolutely everything wrong.”

I can’t pass myself off as a Churchill expert and so it’s up to audiences to go into the film with an open mind and form their own views.  What I can say is that the movie isn’t as engaging as it could be.  Given its very narrow focus, there are scenes that feel repetitive as we continually watch Churchill argue with others and look deep within himself.  Perhaps the scope needed to be broader to hold my attention all the way through.

Actor Brian Cox (The Bourne Identity, Adaptation) has played several historical figures across his lengthy career including Joseph Stalin and J. Edgar Hoover.  He adds to his resume which his energising performance here in the lead role.  It’s a part that will rank highly on his resume.  It’s a shame the film as a whole isn’t as strong.

You can read my chat with star Brian Cox by clicking here.