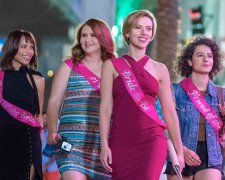 A lot has been said and written about the popularity of Wonder Woman over the past two weeks.  It has reeled in roughly $435 million at the international box-office thus far and ticket sales are still strong.  It illustrates that films with female directors and a strong female cast can be successful critically and financially.

The next movie trying to break ceilings in Hollywood is Rough Night.  In the United States, the “R” rating has a slightly different meaning than here in Australia.  It signifies that a person under the age of 17 cannot buy a ticket unless accompanied by a parent or adult guardian.  Examples of great R-rated comedies include There’s Something About Mary, Superbad, Wedding Crashers and Bridesmaids.

The point of difference for Rough Night is that it’s an R-rated comedy directed by a woman.  It’s just the second time since 2000 that a release from a major Hollywood studio fits that description.  The other was Nancy Meyer’s It’s Complicated (released in 2009) which wasn’t particularly edgy or raunchy.  It was only slapped with an R-rating because of a scene where a character smokes pot.

Suffice to say Rough Night pushes the boundaries a lot further.  As the directorial debut of 34-year-old Luca Aniello, it follows 5 women who head to Miami for a bachelorette party.  Jess (Johansson) is the lucky lady being married and she’s joined by a group of friends she’s known since college – Alice (Bell), Frankie (Glazer) and Blair (Kravitz).  Also along for the ride is Pippa (McKinnon), an Aussie who is unknown to Jess’s other friends but has flown across the globe to attend this important event.

Whilst my thumbs are mostly up, I’ll freely admit that the premise here in stupid.  The women accidentally kill a stripper at their beachside holiday home after he falls off a chair and strikes his head on a marble mantelpiece.  What follows is a calamitous adventure where they try to conceal the death and dispose of the body.  In case you’re wondering why they don’t go to the police, a litany of reasons are offered including the fact they’ve been snorting cocaine all evening, Frankie has already been convinced of previous crimes and Jess is campaigning to become a state senator.

As this all goes on, we get a glimpse of what’s happening with Jess’s other half, Peter (Downs).  He was happily enjoying his own low-key buck’s party but is now worried about Jess getting cold feet after a miscommunication.  Edged on by his own friends, he’s driving across the country to get to Miami and win her affections back.  This side of the film is nowhere near as amusing.

Why this comedy works is because of the casting and the characters.  They’re at their best during the opening scenes as they reconnect after a lengthy period apart.  They’ve all got problems in their regular lives but they’re happy to put those aside and have a crazy, fun time.  Kate McKinnon steals the show with an impressive Australian accent and a warped sense of humour.  All of these leading ladies deserve praise though.  The one-liners are shared around and their comedic timing is pin-point during some of the film’s eyebrow-raising scenes.

The script runs out of puff in the final 20 minutes with a finale that is rushed, clichéd and predictable.  I was hoping they’d push for something with more of an “edge”.  Still, there’s plenty to enjoy in the lead up and a few laughs will be had.  Oh, and make sure you stay for all of the closing credits.