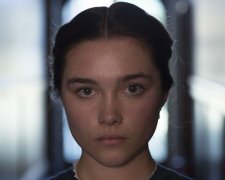 Despite what the title may suggest, Lady Macbeth isn’t a fresh spin on one of William Shakespeare’s most famous plays.  Rather, it’s a loose adaptation of a 19th Century book from Russian novelist Nikolai Leskov.  There’s a small connection with Shakespeare though.  Leskov included Lady Macbeth’s name in the title in reference to the fact that his own leading lady was a cunning murderer.

In adapting the novel to the screen, first-time writer Alice Birch has shifted the setting from Russia to England.  Katherine (Pugh) is a young woman who lives in a beautiful country home but is married to a man she does not love.  It was all arranged with Katherine having no say whatsoever.  Her husband, Alexander (Hilton) offers little in the way of meaningful conservation and his short, quick antics in the bedroom only add to his negative qualities.

The setting here is 1865 and those familiar with the works of acclaimed Jane Austen and the Brontë sisters will know this was a time when men ruled society and women were expected to act in a subservient manner.  Suffice to say that Katherine doesn’t fit that description.  When her husband goes away on a long business trip, she has an affair with Sebastian (Jarvis), a scruffy-looking worker who helps tend to their land.  Her desire for a more fulfilling relationship is reminiscent of Madame Bovary – the novel authored by Gustave Flaubert which was published a few years before Leskov’s.

21-year-old newcomer Florence Pugh brings this intriguing character to life.  There are times when you’ll feel sorry for her.  She is verbally abused by her husband and father-in-law.  She’s warned that she shouldn’t even step foot outside the house.  With the house run by a group of long-term servants, Katherine actually has nothing to do.  There’s a humorous scene where she falls asleep in the middle of the day when sitting on a couch in the living room.  She’s bored stupid.

There are also scenes where your opinions of Katherine may shift.  As the affair commences, she puts one of the household’s most loyal servants, Anna (Ackie), in a tricky position.  Anna knows precisely what is transpiring but keeps quiet in the interests of preserving her job.  Things get a lot darker too.  Katherine will end up with blood on her hands as her secrets spill into the open.

It’s a little slow in places but Lady Macbeth is still an interesting drama from director William Oldroyd.  Music is often used in films to guide audiences towards a certain way of thinking.  A light, bubbly film score puts audiences at ease while a dark, intense score can create a sense of dread.  Oldroyd takes a different route here by leaving music out altogether!  You’re not sure how to feel and this adds to its creepy, unsettling nature.

A cross between a Jane Austen period piece and a Quentin Tarantino drama, Lady Macbeth is decidedly different.