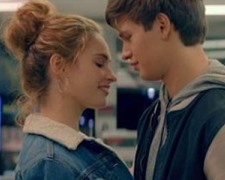 If you’ve seen Shaun of the Dead and Scott Pilgrim vs. the World, you’ll know that writer-director Edgar Wright has a style and a sense of humour that is anything but conventional.  For cinephiles, that’s exciting.  His films take chances and are both original and memorable.  For powerful studio heads, that’s scary.  Wright was scheduled to direct the superhero film Ant-Man in 2014 but left the project due to “creative differences”.

As the saying goes – “when one door closes, another one opens.”  Just two months after leaving Ant-Man, Wright announced that his next project would be Baby Driver.  He had the idea in his head for more than two decades but the time had come to put a script together and get it made.  The finished product shows that he’s been given a great deal of creative freedom.

If you focus solely on the plot, one could argue that this film is a seen-it-all-before action piece.  Doc (Spacey) is the leader of a crew that orchestrates robberies across Atlanta.  Those he enlists include Buddy (Hamm), Bats (Foxx), Griff (Bernthal) and Darling (Gonzalez). They sound like characters from an old-fashioned crime drama.

Critical to the success of all the heists is Baby (Elgort), a quiet young man with incredible skills when behind the wheel of the car.  He’s the perfect getaway driver and his talent would fit nicely alongside Dominic Toretto in the Fast and the Furious franchise.  Baby has fallen in love and is keen to get out of the business but has been pulled back in for “one last job.”

Don’t roll your eyes.  While it sounds a little cheesy, Baby Driver wows audiences with its charm and flair.  Central to everything is its “killer” soundtrack.  Baby is a little socially awkward and suffers from tinnitus (a ringing sensation in the ear) after a childhood accident.  To compensate, he listens to music during almost every waking moment of his day.  There’s a scene where he needs to flee a robbery but before doing so, he has to pull up a particular song on his old iPod to help create the right mood (much to the disgust of his fellow crew members).

Ansel Elgort (The Fault in Our Stars) brings the lead character to life with his terrific performance.  He’s very likeable (despite turning to a life of crime) and you get a sense that he’s a few steps ahead of everyone else with his thought process.  It is part of the reason why he can evade the police during car chases and part of the reason why others in the crew don’t know how to deal with him.  He’s a cool individual.

The tone gets a little darker during the final half-hour and I wasn’t fully sold by the ending but Baby Driver is a super fun action film that uses music as its hook as opposed to over-the-top stunts and special effects.  Thanks Edgar.

You can read my chat with writer-director Edgar Wright by clicking here.