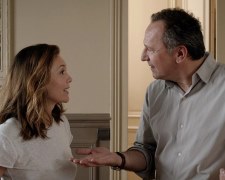 When it comes to filmmaking, many will be familiar with the surname Coppola.  Francis Ford Coppola won 5 Academy Awards and his directing credits include The Godfather trilogy, Apocalypse Now and The Conversation.  His daughter, Sofia, is an Oscar winning writer with credits including Lost in Translation, The Virgin Suicides and Marie Antoinette.  His son, Roman, also deserves a mention as a co-writer of The Darjeeling Limited and Moonrise Kingdom alongside Wes Anderson.

One family member who is not so well known is Eleanor Coppola, the matriarch of the household.  She's done a little bit of work in the film industry over the years but this has been predominantly to support her family.  Her most notable credit is a documentary that went behind the scenes of Apocalypse Now entitled Hearts of Darkness.

It’s been a long wait but the 81-year-old has now written and directed her first feature-length dramatic film, Paris Can Wait.  You get a sense that parts have been inspired by her own life since it begins in Cannes, home of one of the world’s great film festivals.  Michael (Baldwin) is a movie producer trying to get one of his big projects back on track.  Anne (Lane) is his supportive wife who is looking to spend some quality time with her husband.

They were supposed to travelling to Paris for a well-earned holiday but Michael is unexpectedly called away to Budapest for a few days on business.  Anne can’t accompany him because she’s been advised not to fly because of an ear infection.  Looking for an alternative, she accepts an offer from Michael’s producing partner, Jacques (Viard), to go on a road trip to Paris.  She can then wait there for her husband to arrive.

With the stage set, the next hour is spent watching Anne and Jacques travel through a bunch of French towns.  They view historical monuments, stay in nice hotels, and gorge themselves on food in some beautiful restaurants.  It’s reminiscent of The Trip series starring Rob Brydon and Steve Coogan but unfortunately, the conversations shared between Diane Lane and Arnaud Viard aren’t quite as interesting.

While there’s not a lot in terms of plot, the film’s hook is the quasi-relationship that develops between Anne and Jacques.  She’s a married woman and not really interested in advances.  That doesn’t stop him from trying though.  He’s relentless and not particularly subtle.  I wouldn’t describe him as sleazy but his act gets tired quickly.  I was surprised that Anne would even entertain the thought of being with him.

Those that have been to France might enjoy the look of the food and the scenic landscapes but for those after a character-driven drama, Paris Can Wait comes up empty.