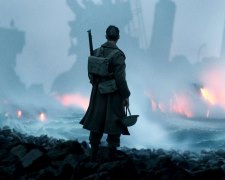 Christopher Nolan has made his mark with creative, inventive dramas set in fictional worlds.  Personal favourites include Inception, Memento, Insomnia and The Dark Knight.  It’s why I was surprised when Nolan announced Dunkirk as his next project in December 2015.  This would be a film based on historical events – a change of pace was reminiscent of when Steven Spielberg made The Colour Purple back in 1986 (after a decade of action and sci-fi).

Dunkirk may be different in terms of narrative but Nolan’s is working with familiar collaborators and his fingerprints can be clearly seen.  Composer Hans Zimmer has crafted another bold film score that is both fast-paced and reflective.  Cinematographer Hoyte van Hoytema used a 25kg IMAX camera like a handheld device to create incredible imagies and put audiences “in the moment” as events unfold.  Editor Lee Smith has produced a tight, powerful final cut that successfully weaves many storylines together.

In promoting his movie back in April, Nolan remarked to the press that “Dunkirk is not a war film. It's a survival story and first and foremost a suspense film.”  That comment will make more sense once you’ve seen the finished product.  It is not intended to be a history lesson about the Dunkirk evacuation which began in May 1940.  We’re told next-to-nothing about World War II, the politics and why the British soldiers are even there.  In fact, we don’t even see a single German soldier.  All we know is what we can see – roughly 400,000 British soldiers are stuck on a French beach and need to find a way home before it’s too late.

Three different perspectives are offered.  On the land, we follow Tommy (Whitehead) – a British Army private who has seen many of his friends die in battle and is desperate to escape.  He teams up with two other soldiers (Barnard and Styles) and they work on a plan to circumvent the orders of Commander Bolton (Branagh) get priority access to a rescue ship.

On the sea, we follow Mr Dawson (Rylance) – a brave and/or naïve British man who isn’t part of the navy but is taking his small motor boat across the English Channel to help with the rescue effort.  He is accompanied by his son (Glynn-Carney) and another teenager (Keoghan) and they find a traumatised soldier (Murphy) in the early stages of their travels.

In the air, we follow Farrier (Hardy) – a Royal Air Force pilot who is trying to shoot down German planes and protect British soldiers awaiting rescue on the beach.  He has limited fuel and must make careful choices about his flight path and method of attack.  His situation is made more perilous when the planes of two fellow pilots are shot down and he’s the last man left standing.

Dunkirk is an intense, unrelenting drama from start to finish.  I was a sweaty mess as the closing credits started to roll.  It reminded me of George Miller’s Mad Max: Fury Road in that the action begins from the opening scene and never lets up.  There’s no break in proceedings to provide character introductions or flashbacks to better times.  The cinematography and deafening sound effects make it feel like you’re alongside these people throughout their journey.  Dialogue is sparse.

In a time where films are becoming easier to watch in the comfort of your own home, Dunkirk reminds us that the big screen can still offer an experience for which there is no substitute.