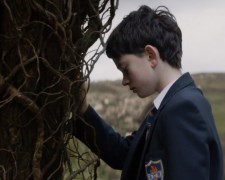 Award-winning British author Siobhan Dowd had an idea for a novel about young boy dealing with a sick mother and a talking tree who tells him stories.  She’d provide details to a few people and written a rough opening.  That was as far as she got.  Tragically, Dowd was diagnosed with breast cancer in 2004 and passed away three years later at the age of 47.

Fellow author Patrick Ness never met Dowd but they shared the same editor at Walker Books.  Ness was told about the idea and asked if it was something he’d like to take on himself.  After an early reluctance, he found himself drawn to the concept and it wasn’t long before he put pen to paper.  A Monster Calls was first published in 2011 and went on to win the prestigious Carnegie Medal, a prize awarded to the best British book for children or young adults.

Ness was worried about giving up the film rights to the novel because of how badly it could be adapted if placed in the wrong hands.  To mitigate that risk, he spent a year coming up with his own screenplay.  There was no guarantee that a movie would even be made.  That changed when Spanish director J.A. Bayona (The Orphanage, The Impossible) got his hands on the novel and expressed a strong desire in bringing it to the big screen.  Bayona and Ness met and quickly realised that they shared the same vision.

There are lots of great family-orientated films released each year but is a growing predictability and conservatism when it comes to their messages.  Writers tend to keep things light and non-threatening.  Again, there’s nothing wrong with this style of movie.  Last year’s Oscar winner for best animated feature, Zootopia, offered plenty of laughs whilst delving into themes of race, prejudice and discrimination.  It was a great film.

What’s been lacking from the cinematic landscape are more dramatic family films that “cut deep” and tap into the strongest of human emotions.  Perhaps that’s why I was so drawn to A Monster Calls.  It revolves around a 12-year-old named Connor O’Malley (MacDougall) whose mother (Jones) is battling terminal cancer.  He’s an age where he kind of understands what is happening but also has a sense of denial about what lies ahead.

Adding to the gravity of the situation is the fact that Connor is very close with his mother and sees her as a pseudo “best friend”.  He doesn’t have a lot of friends at school and is bullied regularly.  He doesn’t have much of a relationship with his father (Kebbell) who now lives in America.  He doesn’t see eye-to-eye with his nit-picking grandmother (Weaver) who rarely has a smile on her face.

Connor’s way of dealing with his troubled life is to delve into a fantasy world that he has created.  He is visited just after midnight by a giant talking tree (Neeson) who promises to share three stories that will open his eyes to the complexities of the world.  It’s these stories that become of the heart of the film and the lessons learned are of relevance to both kids and adults.

A Monster Calls is a beautiful coming-of-age drama with some wonderful visual imagery.  It delves into the ways we deal with grief whilst also reminding us that there are many different perspectives when looking through the prism of life.