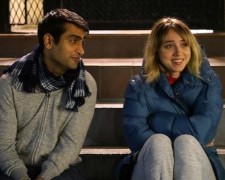 If you’re a screenwriter looking for inspiration, it’s not a bad idea to look close to home.  Mike Mills wrote about his upbringing in California and his relationship with his mother.  The finished film, 20th Century Women, picked up a much deserved Oscar nomination for best original screenplay.  As another example, Richard Linklater recently admitted that his much acclaimed Before Sunrise was based on a real life encounter that took place in Philadelphia.

39-year-old Kumail Nanjiani has made a name for himself in recent years by starring in HBO’s Silicon Valley.  Before that, he was picking up insignificant roles in feature films.  If you search through the Internet Movie Database, he played characters credited as “Pakistani Chef”, “Gary the Delivery Guy” and “Airfield Security Guard”.  You wouldn’t have picked him as someone to break out from the crowd.

Nanjiani has taken matters into his own hands with The Big Sick.  He wrote the script, cast himself in the leading role, and earned the trust of Judd Apatow (The 40-Year-Old Virgin, Trainwreck) who serves as one of the film’s two producers.  It premiered at the Sundance Film Festival back in January 2017 and the distribution rights were snapped up for $12 million after a bidding battle between several studios.  It was evident that the film had commercial potential.

Kumail plays himself in the film.  Well, to be clearer, he plays a slightly “alternate universe” version.  He’s a struggling stand-up comedian living in Chicago who is looking for a big break.  He has a close group of friends and they’re giving it their best shot each night in a small comedy club.  What he makes isn’t quite enough to pay the bills and so he moonlights as an Uber driver to help get by.

One night at the club, he meets Emily (Kazan) and the two head back to his place with what appears to be a one night stand.  Things progress however and the two start spending more and more time together.  There’s a problem though.  Kumail is of Pakistani heritage and his loving/interfering mother is intent on arranging a marriage with a Pakistani girl.  He keeps tight lipped about his relationship with Emily but the more it progresses, the harder it becomes to conceal from his family.

An unexpected event suddenly puts everything in perspective.  Emily is struck down by a mysterious virus and is placed in an induced coma at a Chicago hospital.  It’s there where Kumail meets and spends time with Emily’s parents, Beth (Hunter) and Terry (Romano), while also realising just how strongly he feels about her.  Things are going to get messy but there’s light at the end of the tunnel.

It may have the appearance of another fabricated Hollywood screenplay but most of this took place.  Nanjiani was a comedian working in Chicago back in 2007, his girlfriend spent more than a week in an induced coma, and he had battles with his family because of the fact he was a Muslim and she was a Christian.  The real Emily co-wrote the screenplay but decided not to play herself in the film.  That responsibility was left to Zoe Kazan (Olive Kitteridge) who is very good (when not lying unconscious on a bed).

Many films have been made about cross-cultural relationships but The Big Sick will win over most in the audience with its delicately balanced mix of comedy and authenticity.  It’s getting to the heart of issues that many people have dealt with whilst also having a laugh along the way.