Review: Valerian and the City of a Thousand Planets 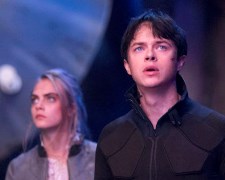 A lot has been said and written about the budget for Valerian and the City of a Thousand Planets.  The total production cost was roughly $200 million which makes it the most expensive film to have ever been shot and produced in France.  It was a big gamble but the risk was shared around.  Funds were pitched in from a substantial number of production companies and distributors across the globe.

This is now relevant because the film has been labelled a “box-office flop”.  It opened in 5th place at the U.S. box-office in mid-July and slipped outside of the top 10 within two weeks.  The early figures out of the United Kingdom (where it opened last weekend) weren’t much better.  Thankfully, the home crowd threw their support behind it.  The opening day box-office in France was the second highest of the year thus far.

Roughly 25% of the cinema releases in Brisbane this year have been a sequel, spin off, reboot or remake.  Some of those films were watchable (e.g. Cars 3) but if I had the choice between a sequel or something fresh, I’d always choose the later.  It’s therefore a shame this film hasn’t found an audience.  French director Luc Besson (The Fifth Element, Lucy) has reached into the depth of his mind and crafted one of the more creative action films we’ve seen in recent years.  It saddens me to think that the formulaic, mindless Transformers: The Last Knight sold more tickets.

I’ll willingly admit this script isn’t perfect but there’s more than enough to compensate.  I’m describing Valerian and the City of a Thousand Planets as a cross between Star Wars and The Matrix.  It’s set several centuries into the future where a human-made space station, known as Alpha, is now home to hundreds of alien species from across the universe.  They all live in harmony (well, kind of) and their vast and varied knowledge.

When the film begins, we’re introduced to Major Valerian (DeHaan) and Sergeant Laureline (Delevingne), two members of a security unit that help maintain law and order.  Working under the instruction of their commanding officer (Owen), they travel to another planet and recover a small animal known as a “converter”.  They’re not sure what it’s needed for but they realise it has significant value.

Things get messy when they return to Alpha.  A radioactive zone has been identified and if not contained, the entire space station could be consumed within a week.  Further, the commander is kidnapped by a group of mysterious aliens and taken to an unknown location.  Valerian and Laureline are drawn into the situation but they’re unsure about their role and end goal.

This is a fun, cool, wild ride.  Besson taken the French science fiction comics created by Pierre Christin and Jean-Claude Mézières and brought this beautiful, colourful world to life on the big screen.  There’s an incredible level of detail and you can appreciate the high price tag.  The creative opening sequence in the marketplace where characters straddle between dimensions sets the early benchmark and there are many other highlights throughout (including a great cameo from Rihanna).

Most importantly, the film never takes itself too seriously.  I enjoyed the banter between stars Dane DeHaan and Cara Delevingne as they continually flirt with each other whilst also trying to stay focused on the job at hand.  One could argue that it’s a little cheesy but I was still amused by their sly remarks and insults.  The lack of a villain also frames the film has a quasi-mystery.

Not everyone will go for Valerian and the City of a Thousand Planets.  It’s bold and unorthodox – qualities that have hindered its positive world-of-mouth to date.  Forget the naysayers.  Go in with an open mind and be entertained.