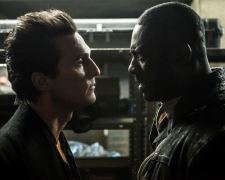 The Dark Tower is a series of 8 books written by acclaimed author Stephen King between 1982 and 2012.  Several attempts had been made to bring them to the big screen without success.  They were labelled “un-filmable” by some given their length and dense material.  After a lot of false starts, it has finally fallen upon the shoulders of Danish director Nikolaj Arcel (The Girl with the Dragon Tattoo) to launch the movie franchise.

Stephen King is largely associated with horror-thrillers but there have been plenty of exceptions.  The Shawshank Redemption, regarded as one of the greatest films of all time, originated from a Stephen King short story.  The Dark Tower series is his foray into the world of science-fiction and fantasy.  He admits to being inspired by the likes of J.R.R. Tolkien, author of The Lord of the Rings, in first putting pen to paper.

Having not read any of The Dark Tower books, I can’t make a definitive statement as the authenticity of the adaptation.  However, I’ve read several online articles which have been critical in this area.  They speak of rich detail being lost given that the narrative from several of the novels has been condensed into a surprisingly short 95 minute running time.  My advice is to therefore tread carefully if you’re lover of King’s works.

As to the narrative, the film revolves around an 11-year-old named Jake Chambers (played by newcomer Tom Taylor) who has strange, vivid dreams.  He sees a giant tower that is continually under attack and he also sees a “gunslinger” who is helping defend it.  His psychiatrist forms a reasonable conclusion – these dreams are a way in which Jake is coping with grief following the death of his father.

Jake thinks otherwise.  He believes the dreams are “real” and the attacks on the tower are linked to a series of powerful earthquakes which have struck New York City.  It isn’t until two sinister-looking individual arrive on his doorstep that he realises the truth.  Through his dreams, he is peering into a parallel universe.  If the tower in that world should collapse, the shockwaves would be powerful enough to destroy Earth.

After putting the few pieces of a puzzle together, he travels into the alternate universe and teams up with the Gunslinger (Elba) to destroy whatever evil confronts them.  Their end goal is defeat a power hungry sorcerer (McConaughey) but they’ll need help from a few other people along the way.

You can see what this film is trying to be but it’s not all that interesting.  It rushes between events and there’s not a lot of room for character development.  Matthew McConaughy isn’t a convincing villain and his background isn’t fleshed out in much detail.  The more interesting dynamic is between Idris Elba and Tom Taylor but they don’t spend a lot of time together.  When they do, much of their conversation is superficial.

There is hope this will become a long-running movie franchise but based on what’s been served up here, I have doubts about those ambitions.