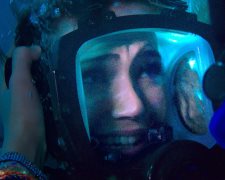 There are plenty of dangerous animals in the wild but we do seem to have an unhealthy fascination with sharks when it comes to making movies.  Jaws set the almost unreachable benchmark in 1975 and it’s been followed by the likes of Deep Blue Sea, Open Water, The Reef and The Shallows.  Also worth a mention are a group of farcical spoofs headlined by Sharknado.

As a trained deep sea diver as well as the film’s writer-director, Johannes Roberts has tried to create something different with 47 Metres Down.  The setting is the most noticeable point of difference.  Instead of the protagonists being stuck on a boat, a rock, or a floating object, Roberts takes us below the surface and into a much darker world (literally).

How they get there is fairly formulaic.  Lisa (Moore) and Kate (Holt) are two young women holidaying in Mexico.  Lisa needs some cheering up after being dumped by her long-term boyfriend and Kate is doing her best to be the supportive best friend.  Having ticked of a few of the normal “touristy” things, Kate suggests they do something more adventurous and go on a cage diving expedition off the Mexican coast.

The warning bells start going off in the heads when they see the rusty looking boat and its rough crew.  Still, they’ve paid their money and decide to follow through.  They put on their scuba gear, jump in the cage, and find themselves lowered just beneath the surface.  The views are stunning and they get a close look at a killer shark from behind the cage’s protective bars.

It’s at this point where the “fun” begins.  The winch breaks and the cage plummets to the ocean floor - 47 metres below the surface as noted in the film’s title.  Making a mad dash to the surface is not an option given the risk of decompression sickness.  They could stay in the cage and wait to be rescued but with no radio contact and just an hour’s worth of air, that too comes with serious risks.  The clock is ticking.

Once it gets past the ho-hum introduction, 47 Metres Down becomes a tense thriller that makes the most of its claustrophobic setting.  We only see things through the eyes of the two leading characters and have no perspective about what’s going on back on the surface.  Has the boat called for help?  Is someone coming to rescue them?  We’re in the same position as Lisa and Kate in that we have no idea.

It’s also a movie that should get audience members thinking.  What would you do in the same situation?  Would you be able to keep calm and think things through in a level-headed manner?  Do you take an “every man for himself” mentality and focus on your own survival above that of your friend?  Do you take a chance and try to formulate an escape plan or do you wait and hope to be rescued?

Johannes Roberts had a few different ideas when it came to the finale and I’m not fully convinced by the choice he made (without giving too much away).  That said, he deserves full credit for the strong second act and the realistic scenario.