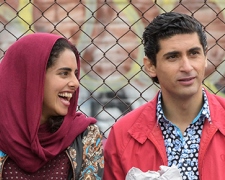 Most filmgoers aren’t fussed about awards.  They don’t care which foreign language film won the Palm D’or at the Cannes Festival or which American film campaigned strongly to win the most Golden Globe Awards.  All of that said, one prize that may be of interest to Australian audiences is the audience award at the Sydney Film Festival.  This honour isn’t decided by a handful of critics who watch 300 movies a year.  This is assessed by the thousands of people who attend each year as a ticket buying member of the public.

The 2017 award was bestowed upon Ali’s Wedding, an Australian romantic comedy that is being fuelled by great word of mouth.  As crazy as the story sounds, it is based on actual events.  Born in 1983, Osamah Sami had a tough upbringing in war-torn Iran.  His family immigrated to Australia in the mid-1990s and that too came with its challenges.  All of this is chronicled in his memoir, Good Muslim Boy, which won the New South Wales Premier’s Literary Award in 2016.

It’s too hard to encapsulate all of Osamah Sami’s life into a two-hour film and so the focus is placed on a few key events.  Not only did Sami co-write the screenplay, he also stars in the leading role (with the character’s name changed to Ali).  It’s reminiscent of what we saw Kumail Nanjiani do earlier this month with The Big Sick.  Both are playing a slightly alternate version of their real selves on screen.

The film doesn’t delve into Ali’s life in Iran.  It’s spread across a few weeks where his character has just finished high school and is studying to sit the medical school entrance exam at the University of Melbourne.  His father (Hany) is a high-profile, much-loved cleric and that only adds to the pressure on Ali’s shoulders.  Everyone in the tight-knit Muslim community assumes he is destined for great things and will pass comfortably.

Ali knows he hasn’t studied hard enough and that’s confirmed when the results arrive in the mail.  He scored just 65% - well below the required cut-off.  Adding to his sense of failure is the fact that two acquaintances blitzed the exam.  Moe (Khalafalla), the son of his father’s rival, scored 96%.  Dianne (Sawires), a girl he’s had a crush on for some time, scored even better with 98%.

So what does Ali do?  He makes a rash, spur-of-the-moment decision and tells everyone that he too scored 96%.  One lie becomes two… which becomes three.  It’s not long before Ali has gone down a path of deception for which there is no easy road back.  It threatens to destroy his family’s reputation and his chance at winning the heart of the strong-willed Dianne.

It might sound rather heavy but Sami has followed in the footsteps of Australian filmmakers such as P.J. Hogan (Muriel’s Wedding) and Jocelyn Moorhouse (The Dressmaker) in finding humour within this dysfunctional family.  It ties back to the mantra that sometimes all you can do about a bad situation is laugh.  The comedic tone has clearly connected with audiences given the buzz from the Sydney Film Festival.

The film takes a few unnecessary detours that disrupt its flow.  As an example, there’s a short sequence where Ali and his friends travel to the United States for a special event.  It provides an amusing/concerning anecdote but perhaps it belongs in a separate film.  It feels rushed and out of place within the screenplay.

It’s a minor weakness of what is a very entertaining film.  It explores the blend of Middle Eastern and Australian culture within this country but also tells an amusing, family-driven tale that most will appreciate and celebrate, regardless of their background.  Go the Bombers!