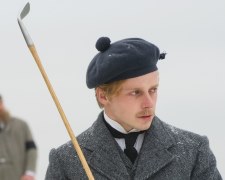 They’re two passions of mine but it’s not often that golf is depicted through the medium of cinema.  Caddyshack, Tin Cup and Happy Gilmore are part of very small collective of successful golf movies.  Tommy’s Honour is the latest entrant in that group and tells the story of Young Tom Morris (Lowden), a Scottish lad who won four Open Championships in the 19th century and helped shape the game of golf as we know it today.

As a broad genre, sporting movies are always a challenge for the screenwriter.  If you go with a work of fiction, there’s a high risk that audiences won’t consider it credible.  If you go with an event that actually happened, how can you possibly create a level of intensity that matches the original?  I was at Torrey Pines for the 2008 U.S. Open when Tiger Woods holed a 12 foot putt on the 18th green to force a play-off.  As amazing as it was, there’s no point making it into a movie.  You’re better off watching a replay on YouTube where you can see the real Tiger and listen to the real commentators.

Tommy’s Honour has a slight advantage in that regard because we’re travelling back to the 1860s and delving into a period of golf history that isn’t well known or well documented.  Only a small number of photos exist of Young Tom Morris and there’s certainly no video footage.  Kevin Cook, a former senior editor at Sports Illustrated magazine, published an award winning book on Morris’ exploits in 2007.  It’s that work which has been adapted for the screen by Cook and his wife, Pamela Marin.

You could argue that Cook and Marin make a good screenwriting duo.  He is a golf tragic who spent countless hours researching the subject matter.  He delved through the archives in Scottish libraries and interviewed historians who had passed information down from generation to generation.  Marin is less passionate about the game and so tackled the story from a different angle.  Rather than focus on Morris’ achievements on the course, she was keen to understand his relationship with his father, his family and his wife (Lovibond).

The film wants to reach as broad an audience as possible but it’s evident that golfers will take the most away from this.  Young Tom Morris was an excitable character that helped promote the game across Scotland.  He’d won his fourth Open Championship by the age of 21 and was arguably the first individual to be financially successful from the game of golf.  He and his counterparts were paid significant sums of money to participate in exhibition matches across the country.

An interesting point of note about the film is that it’s directed by Jason Connery, the son of Oscar winner Sean Connery.  Jason grew up playing golf with his father and hence the interest in the subject matter.  To transport us back into the 19th Century, he’s found some great locations across picturesque Scotland and has fun showing us “old school” golf clubs and attire.  The special effects are a little too obvious in places (such as the flight of the golf ball) but this can be excused given the film’s tight budget.

Tommy’s Honour is another worthy credit on the resume of rising British star Jack Lowden (Dunkirk).  He’s created a likeable, charismatic character who wants to change the world whilst staying true to his values.  Lowden admits to being a terrible golfer but spent many hours with a coach to look as convincing as possible on screen.  Peter Mullan (Trainspotting, War Horse) is equally good as Morris’ more “traditional” father and it’s also nice to see a cameo from Sam Neill (Jurassic Park) who plays the stuffy Captain of the St Andrews Links.

The dialogue is a bit stiff in places but Tommy’s Honour is must see viewing for fans of golf, Scotland, or both.