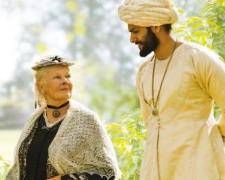 She’s been acting since the late 1950s but the film role that helped boost the international profile of British actress Judi Dench didn’t arrive until 1997.  In John Madden’s Mrs. Brown, she played one of the great British monarchs, Queen Victoria, as she tried to cope with the death of her husband in 1861.  In addition to winning a BAFTA Award and Golden Globe, Dench picked up her first Academy Award nomination (losing to Helen Hunt in As Good As It Gets).

For those who believe that “good things come to those who wait”, Dench’s story belongs in the textbook’s opening chapter.  She was 62 years of age when she made Mrs. Brown and in the two decades that have followed, she’s appeared in roughly 40 movies and earned another 6 Academy Award nominations (winning once for Shakespeare in Love).  She’s showing no signs of slowing down and will go down in the history books as one of cinema’s greatest performers.

Dench’s backstory is relevant because Victoria & Abdul marks an important milestone.  She reprises her role as Queen Victoria for the first time since the career revitalising Mrs. Brown.  This time around, we see the much loved Queen in the later years of her life – from 1887 through to her death in 1901.  It was during that period when she became the longest serving monarch in British history (a record recently broken by Queen Elizabeth).

The image we see of Queen Victoria during the opening scenes is not how she would prefer to be remembered.  Having served Britain for half a century, she’s tired of the ongoing commitments.  She’s assisted out of bed by her staff each morning and she’s stuck in an endless cycle of public appearances and meetings with dignitaries.  There’s a humour moment where she falls asleep whilst hosting a lavish dinner.

In search of something different in her life, Victoria strikes up a friendship with Abdul Karim (Fazal), an Indian servant who had travelled to London to present the Queen with a special coin.  He was to return home to India but the Queen asked him to stay on.  It wasn’t long before he came one of her closest confidants.  They spent many hours together with Abdul teaching her about Indian culture and history.  This infuriated her family and political advisors who did like his growing level of influence.

Directed by Stephen Frears (The Queen, Philomena) and written by Lee Hall (Billy Elliot, War Horse), Victoria & Abdul is based on the novel of Indian writer Shrabani Basu.  She stumbled across the story and was surprised how little was known about it.  In putting together her book, she had access to the journals of both Queen Victoria and Abdul Karim.  The later had been handed down from generation-to-generation and had not been made public until Basu made her inquiries.

The story is the biggest attraction here and it’s amazing to think that such an interesting tale has been kept hidden for so long.  It’s certain to grab the attention of British monarchists.  I’m not fully sold by the approach but Frears and Hall have gone with something light and crowd-pleasing.  The Queen’s family are presented as villainous ogres and Abdul can seemingly do no wrong (even when he does make a mistake in judgement).  The film also avoids subjects such as the religious divide in India and the effect of British rule – both were needed to provide context to the characters’ mindset.

At its heart though, this is about the power of friendship and it’s hard to fault the performances of Judi Dench and Ali Fazal in the leading roles.  You get a strong sense of Victoria’s loneliness and the way in which her spirits lift when interacting with Abdul.  Offering laughs with a tinge of sadness, audiences should soak it up.

You can read my chat with author Shrabani Basu by clicking here.