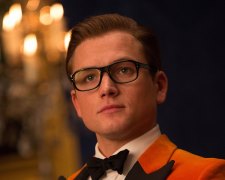 There are risks when launching a new film franchise but 20th Century Fox found success in 2014 with the release of Kingsman: The Secret Service.  Based on the comic book series, the film made more than $400 million at the international box-office and was spurred by good word of mouth (despite the controversy surrounding a poorly timed joke during the film’s climax).  It’s no surprise that this second film was put into production not long after.

It follows in the same vein as the original and is trying to be a James Bond film on steroids.  This is evident in a lengthy opening action scene that some will call fun and others will call farce.  Our hero, Eggsy (Egerton), is attacked by a rejected Kingsman applicant who has “gone bad”.  That’s a slight understatement.  The pair duke it out in the back seat of a car while being pursued by a bunch of stereotypical, not-so-intelligent goons.

It’s not long after when the film’s keynote villain is revealed.  Poppy Adams (Moore) has a 1950s style lair hidden on a mountain top in Colombia.  She runs the biggest drug cartel in the world but is frustrated by the fact her name isn’t included alongside Bill Gates and Richard Branson as one of the all-time great entrepreneurs.  Of course, this is because her business is illegal.  Unlike alcohol and tobacco, the marijuana and heroin she sells are frowned upon in most countries.

That’s something she’s looking to change.  Poppy puts a virus in her latest batch of drugs and it’s not long before millions of people come down with unusual, life-threatening symptoms.  She promises to provide them all with an antidote but on one condition – the President of the United States agrees to regulate the drug industry and legitimise her thriving business.  Oh, and she’ll also release Elton John (paying himself) who she’s kidnapped for her own amusement.

Eggsy and his tech guy, Merlin (Strong), travel to Kentucky to form an alliance with an equally secretive spy organisation in the United States known as Statesman.  The operate out of a distillery in Kentucky and it’s therefore no surprise to learn the code names for their agents include Tequila (Tatum), Ginger Ale (Berry) and Whiskey.  What follows is a humorous, albeit standard, battle of good versus evil.

Kingsman: The Golden Circle doesn’t quite have the charm and freshness as its 2014 predecessor but it’s still entertaining.  Taron Egerton continues to be a likeable, common hero.  His character comes across as suave and gentlemanly… until he opens his mouth.  Mark Strong is also very good but it’s Oscar-winner Julianne Moore (Still Alice) who steals the show as the villainous, over-the-top Poppy Adams.  We don’t often see her as a goofy, comedic character but she makes the most of the opportunity here.

Not everyone gets as big, juicy role.  Jeff Bridges and Channing Tatum are not afforded much screen time.  It’s also surprising to see the acclaimed Emily Watson reduced to what is not much more than a cameo.  Director Matthew Vaughn (Kick Ass) continues his use of fast-paced action sequences.  He wins points for creativity but the repetitive nature of these scenes and the over reliance on special effects makes them a touch tiring.

Clocking in at a lengthy 141 minutes, I think we’ll be hearing more from the Kingsman.