Review: Battle of the Sexes 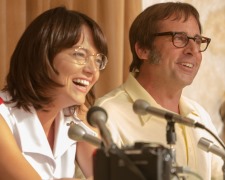 A lot has been made in the past year about the promotion of women’s sports and the pay gap between their men’s counterparts.  The AFL started a women’s league in late 2016 and the inaugural 7-match season drew an attendance of close to 400,000.  The Australian Cricketers’ Association recently negotiated an 80% increase in the base rate of pay for international women’s players.  Super Netball was launched with games televised weekly on free-to-air television.

These are all good news stories but the reality is that women have been fighting for their fair share for a long time before this.  Battle of the Sexes takes us back to 1973 when tennis became an early pioneer on this particular issue.  It was at this time when the U.S. Open became the first grand slam tennis tournament to offer equal prizemoney for the men’s and women’s champions.  For those interested, the Australian Open didn’t reach parity until 2001.

Oscar nominated screenwriter Simon Beaufoy (Slumdog Millionaire, The Full Monty) has three major stories to tell in the Battle of the Sexes.  The first looks at the creation of the Women’s Tennis Association.  Led by reigning Wimbledon and U.S. Open champion Billie Jean King (Stone), a group of leading women players broke away from the U.S. Lawn Tennis Association in search of better pay.  Gladys Heldman (Silverman) helped secure sponsorship for a new women’s tennis tour and it wasn’t long before major inroads had been achieved.

The second story is the most intimate.  King (Stone) was married but it was while playing on tour that she realised she was attracted to women.  She had a lengthy love affair with her hairdresser, Marilyn Barnett (Riseborough), but this had be kept secret from the homophobic public or else it would threaten the success of the tour and her own dealings with sponsors.  That itself caused huge stress which affected King’s performances on court.

The final story is the one given the most attention in the film’s advertising (and title).  It was also in 1973 when former Wimbledon and U.S. Open champion Bobby Riggs, now 55 years of age, challenged Jean to a televised exhibition match to prove that a retired senior citizen could beat the world’s number 1 female player.  With a crowd of over 30,000, it set a new world record for the highest attendance at a tennis match (which it held for 37 years).

In keeping with the tennis theme, it’s hard to find “fault” in the performances being offered here.  Both are likely to earn an Academy Award nomination.  Emma Stone is outstanding as Billie Jean King.  Her character exudes confidence when in the public eye but her insecurities are revealed when behind closed doors.  Steve Carell is impressive as Bobby Riggs but his character isn’t developed in as much detail.  We know he’s a gambling addict and a “show pony” but we never get to the heart of his views on women.  Was he sexist or merely just promoting his own brand?

Directed by the husband-and-wife team of Jonathan Dayton and Valerie Faris (Little Miss Sunshine), Battle of the Sexes is an important, significant, enlightening drama but it does struggle to balance the breadth of material.  As an example, King develops an on-court, off-court rivalry with Margaret Court (played by Australian actress Jessica McNamee) but these scenes are kept short and simple because there isn’t time to probe deeper.  The same could be said of Riggs' relationship with his son.

The events depicted took place 44 years ago but once you’ve seen the film, you’ll realise it’s a story that has just as much relevance in today’s world.  See it for its narrative and see it for its 1970s fashion.