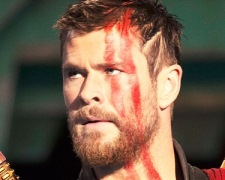 Thor: Ragnarok is good.  It’s easily the best in the Thor trilogy – an impressive feat given that sequels often lack the spark and freshness of the original.  To make a further comparison, it’s in a close battle with Wonder Woman and Spider-Man: Homecoming in determining the best superhero movie of 2017.

If you’ve been following social media over the past two weeks, none of this should be a surprise.  The buzz has been almost entirely positive since more than 2,000 people turned up for the Australian premiere at Robina.  There’s been an added layer of excitement here in Queensland given the film was made at Village Roadshow Studios at Movie World.  Additional scenes where shot in the Brisbane CBD last July with the corner of Albert and Margaret Street transformed into New York City.  I was one of thousands who went out for a stickybeak.

There are as many villains as heroes in Thor: Ragnarok.  That’s not a bad thing considering that villains are often the most interesting characters in an action flick.  Hela (Blanchett) is Thor’s sinister older sister who has the ambitious goal of ruling over all planets.  Surtur is a fiery, CGI-generated demon who cannot rest until he obliterates Asgard, Thor’s home planet.  The Grandmaster (Goldblum) is a mischievous elder who enslaves powerful aliens for his own gladiator-style fighting games on the planet of Sakaar.  Let’s not forget the returning Loki (Hiddleston) who shows glimpses of goodness but can’t shake his thirsty for domineering power.

It falls upon Thor (Hemsworth) to save the universe once again but he will need a little help along the way.  A newcomer to the series is Valkyrie (Thompson) – a warrior who once had an important role on Asgard but now operates a “talent scout” for the Grandmaster.  Returning faces include the big green Hulk (Ruffalo) and the wizard-like Heimdall (Elba).

This is a career changing project for New Zealand born director Taika Waititi.  Over the past decade, he’s forged a reputation for making great low-budget films such as Boy, What We Do in the Shadows and Hunt for the Wilderpeople.  The budget is roughly 100 times what he’s accustomed to but Thor: Ragnarok still feels like a Taika Waititi film.  It’s got a warped, darkish sense of humour and some fun, well-timed cameos.  He also finds a way to weave himself into the action by playing the film’s funniest character.

It’s hard to criticise any element of the production.  There are many subplots to cover but the screenplay devotes the right amount of time to each.  A distinctive synthesised film score has been created by Mark Mothersbaugh (The LEGO Movie).  The costume designers and make-up artists deserve praise for their work on Cate Blanchett and Jeff Goldblum.

The bottom line is that Thor: Ragnarok is a really fun movie.  The story is compelling and the one-liners are hilarious.  I can’t wait to see it again.