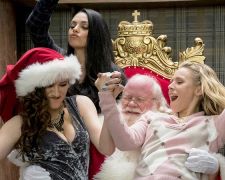 Each year, I survey a bunch of film critics based in Brisbane to put together a collective list of the year’s best.  A question I ask of them all is “which film were you most surprised to enjoy?”  Responses I received in 2016 included Nerve, The Shallows, The Nice Guys and Deepwater Horizon.  My answer was Bad Moms given the impressive comedic chemistry generated by stars Mila Kunis, Kristen Bell, Kathryn Hahn.

As the original was a huge hit at the box-office, no time has been spared in getting this sequel off the ground and into cinemas.  Very little has changed in terms of the production.  We’ve got the same three leading ladies, the same writers, the same directors and same producers.  The question is whether it can create the same level of laughter.

The premise of the earlier film revolved around three mothers who delegated responsibility to others so as to free up more time for themselves.  The same can be said of this next instalment but its focus is slightly narrower – Christmas.  Amy (Kunis) opens with a monologue describing just how stressful Christmas can be.  So much preparation goes into the event and there’s extra pressure on mums to ensure everything goes perfectly.

The film is titled A Bad Moms Christmas in the United States but goes by the simpler name of Bad Moms 2 here in Australia.  Perhaps a more appropriate title is “Crazy Grandmothers”.  Amy, Kiki (Bell) and Carla (Hahn) are all visited by their own strange mums in the five days leading up to this year’s Christmas.

Amy’s mum is played by Christine Baranski (Mamma Mia!) – a heinous, pretentious woman who never says a nice word about anyone.  She mocks Amy for her mothering skills, her weight and her cooking.  Kiki’s mum is played by Cheryl Hines (Curb Your Enthusiasm) – a borderline psychotic who wants to spend every minute of every day with her married daughter.  There’s even a moment where she snoops on Kiki and her husband as they get intimate in the bedroom.  Carla’s mum is played by Susan Sarandon (Dead Man Walking) – a chain-smoking alcoholic gambler who slips in and out of her daughter’s life.  She’s only arrived in town because she’s desperate for money.

With things starting to get out of control, Amy, Kiki and Carla share a “few” drinks in a shopping centre food court and make a pact to “take Christmas back”.  It’s time to stop being a perfectionist and time to stop with the lavish, over-the-top festivities.  They’re going to put their foot down, stand up to their mothers, and do Christmas in their own unique way.

As someone who has seen their own mum stress over the intricacies of Christmas planning, I can appreciate the scenario.  However, it’s a limited storyline that doesn’t provide as much room for humour.  Christina Applegate was the butt of many jokes in the first movie as the villainous head of the PTA but with the exception of a small cameo, she’s absent here.  The heavy lifting therefore falls upon Baranski, Hines and Sarandon but their characters are too over-the-top.  It’s hard to believe that anyone would take their side on any issue (particularly the kids).

It’s not all bad news through.  There are a handful of great scenes that provide laughs.  Most of them revolve around Kathryn Hahn, her work at a beauty salon, and her interaction with a male stripper from out of town.  It adds up to an MA rating in Australia for its “strong crude sexual humour” but it doesn’t push the envelope as strongly as in Girls Trip – a better female-centric comedy released two months ago.