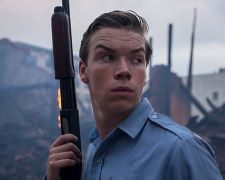 On 23 July 1967, a large group of police officers raided a late-night, unlicensed bar in an African American neighbourhood in Detroit.  The intention, rightly or wrongly, was to arrest a few patrons and escort them back to the police station without inflaming racial tensions.  That plan was a spectacular failure.  It sparked a 5-day riot through the streets of Detroit that culminated with 43 dead, 1,189 injured and more than 2,000 buildings destroyed.

There are a myriad of stories that could be told from those 5 days but Oscar winning writer Mark Boal (The Hurt Locker) focuses on the one that’s been given the most attention in the riot’s aftermath.  Two nights after it all began, police responded to the sound of gunfire at the Algiers Motel.  What followed was a forceful interrogation of the hotel’s residents as the officers tried to locate the gun and identify who used it.

It’s this powerful second act that resonates most strongly.  Will Poulter (The Maze Runner) is outstanding as the racist police officer who flouts the rule book in pursuing his own cause.  When one of the hotel’s African American guests tries to escape the mayhem, he shoots him in the back from point blank range and then makes up a story about acting in self-defence.  As sickening as it is, Poulter’s character tries to justify his actions to his fellow officers.  He foolishly believes that killing African Americans to “send them a message” will somehow squash their spirit.

Director Kathryn Bigelow has continued on from her great work in The Hurt Locker and Zero Dark Thirty and created an intense drama that feels documentary-like in nature.  The hand held camera zooms in on the faces of the distressed hotel guests and we see the emotions build up as the night drags on.  There’s clearly indecision about what they should say to the police officers.  It’s as if the truth is irrelevant.  It’s a game of psychological warfare to see which side will yield first.

Those staying at the Algiers Motel include two members of a soul music group, a Vietnam War veteran, and two teenage girls who are visited from Ohio.  Caught in the middle is an African American security guard played by John Boyega (Star Wars: The Force Awakens).  He’s the film’s most interesting character in that he displays almost zero emotion.  He knows that the racist police officers have crossed the line but he’s afraid to speak up – perhaps because he lacks courage or perhaps because he doesn’t want to jeopardise his own employment.

There’s a lot to think about in Detroit and as evidenced from their previous collaborations, Bigelow and Boal don’t want audiences to feel “warm and fuzzy” as the credits start to roll.  It’s easy to look back at the Algiers Motel incident and point the figure at a few rogue cops but is it that simple?  How far have we advanced as a society over the past 50 years?  Those involved in the newly created activist movement, Black Lives Matter, would passionately argue the problems from 1967 still exist in 2017.