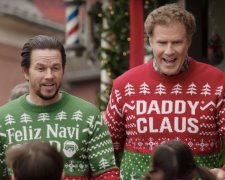 In Bad Moms 2, the writing team added a layer of complexity but introducing three grandmothers to cause trouble for the film’s three leading ladies.  Those behind Daddy’s Home 2 came up with the same idea when working on a screenplay for the popular original (released back in 2015).

For those needing a refresher course, Daddy’s Home starred Will Ferrell as an insecure stepfather trying to win the affections of his two stepchildren.  He was making progress until their real father, played by Mark Wahlberg, arrived back on the scene.  After a silly battle to see who could get the upper hand, the film ended with both extending the olive branch and agreeing to be “co-dads”.

Given that things ended so acrimoniously at the end of the last movie, Daddy’s Home 2 needs to find a new way to make conflict.  This is achieved by going one back one generation and bringing the two granddads into the equation.  John Lithgow plays the father of Will Ferrell whilst Mel Gibson does the same for Mark Wahlberg.  They have similar personalities to their children which becomes a recipe for trouble.

It’s Gibson’s character that starts the chaos.  He’s an aggressive, macho guy who is disgusted that his son is allowing his kids to be raised by another man.  Most wouldn’t have a major problem with this.  They’d appreciate that not all relationships go the distance and when parents re-marry, custody of children often needs to be shared around.  Unfortunately, he doesn’t share this view and he’s doing whatever he can to cause tension between the two fathers.

The other similarity with Bad Moms 2 is its pitch to be a Christmas movie.  That film was set in the days leading up to Christmas and dissected all the stressful planning that goes into the lead up.  For Daddy’s Home 2, the arguments are around which households will get the honour of hosting Christmas lunch and dinner.  It’s Gibson who forces his own compromise on them all – he’s rented a luxurious house for everyone so that festivities can take place at a neutral venue.

It’s one of my all-time favourite movies and I was stunned to read last month that Mark Wahlberg asked God to forgive him for starring Boogie Nights (released in 1997).  He later clarified by saying that he didn’t regret the role but he’s not sure if he’d make the same choice today as a 46-year-old man who is married with 4 kids.  It doesn’t fit too well with his religious beliefs and his ability to serve as a role model for his family.

That statement gets to the heart of why Wahlberg is appearing in movies like Daddy’s Home 2.  It’s a lightweight, family-friendly comedy that promotes familiar, wholesome values.  It’s not rude and crude like Bad Moms 2 – the most obvious point of difference between the two.  Whether you like this or not will ultimately come down to your own sense of humour.  For the record, I lean more towards the edgier comedy offered up in the Bad Moms franchise.

This film will have its fans and will find its audience but it didn’t offer enough laughs for me.