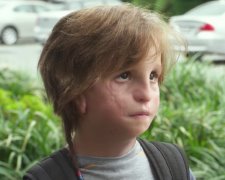 In doing the publicity rounds for this film, author R.J. Palacio has been recounting the real life story that inspired her book.  She was with her 3-year-old son in a shop when he started crying in fear after seeing a young girl with craniofacial differences.  Palacio didn’t want to embarrass the girl and so rushed out of the store with her son.  This didn’t go unnoticed however.  The mother of the girl calmly said to her child “I think it’s time to go” and it was that moment that resonated with Palacio.  She asked herself – what could she teach her own children so that they wouldn’t react the same away again?

Wonder (the book) was the answer to the question.  First published in 2012, it became a best seller that was also picked up to be part of school curriculums.  The film rights were bought not long after and having gone through a bunch of writers and directors over the past few years, it fell upon Stephen Chbosky to bring it to the screen.  He’s familiar with youth-orientated dramas having written and directed The Perks of Being a Wallflower in 2012.

The story is centred around August “Auggie” Pullman (Tremblay), a 10-year-old kid who was born with a rare condition that has affected both his skull and face.  He tells us during the film’s opening that he’s gone through 27 surgeries that have helped him to breathe, to see and to hear.  Given all the operations and given his not-so-normal appearance, his parents (played by Roberts and Wilson) made the decision to home school their child.  They wanted him to give him a great education whilst not subjecting him to the inevitable bullying of the school playground.

It’s time for that model to change though.  Auggie’s parents realise that’s there more to a school than just education.  Their son needs the chance to interact with others, develop social skills and make lifelong friends.  That gets to the crux of where this film is set.  Auggie is enrolled in the local middle school and we follow the ups and downs of his school year.

There’s an added layer of narrative that helps gets the film’s themes and messages across.  There are moments where the story breaks away from Auggie and follows other characters that have been influenced by his life.  These include his old sister, Via (Vidovic), and his new best friend, Jack Will (Jupe).  The moments involving Via resonate strongly – she puts up a tough face but deep down, she struggles with the lack of attention relative to her younger brother.

It’s a little simplistic in places but it’s hard to be critical of such a heart-warming film.  Many will remember Jacob Tremblay’s skilful performance in Room and he’s just as good here in the leading role.  It’s hard to believe he’s just 11 years of age.  The supporting characters all get their chance to impress.  Julia Roberts and Owen Wilson continually stress as Auggie’s loving parents whilst Mandy Patinkin and Daveed Diggs offer wise words as teachers at Auggie’s school.

As part of the film’s release, a push has been made for people to take up the “Choose Kind Challenge.”  They can get a jar, choose a token (such as a marble or a button), and then deposit one into the jar for every kind act they perform.  The end goal is to fill the jar and in the process, make the world a better place.  It’s a nice idea that illustrates the power than films have beyond the walls of a darkened cinema.