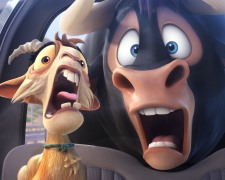 I’ve described many movies as a “load of bull” but I think this is the first time I’ve said that a positive attribute.  Ferdinand is the latest 3D animated feature from Blue Sky Studios – the company behind such projects as Rio, The Peanuts Movie and The Ice Age franchise.  They’ve produced some quality films but seem to be a few notches behind Disney and Pixar when it comes to great scripts.

Based on the children’s book first published in 1936, Ferdinand is the story of a talking Spanish bull (voiced by John Cena) who is trying to “buck” convention and make a better life for himself.  He doesn’t want to follow in the hoof prints of his father and become a fighting bull.  Ferdinand is a passive creature who would rather lie on top of a hill and smell flowers than run around an arena chasing a matador with a red cape.

The message here is obvious from the get-go – there’s nothing wrong with being a little different.  Ferdinand is taunted by his fellow bulls for being soft and weak but he’s not going to let them get the better of him.  Adding to his problems is a “calming goat” (voiced by Kate McKinnon) who doesn’t always provide the best advice.  It’s not long before he finds himself in a series of perilous situations that threaten the survival of both he and his friends.

We’ve been blessed with two terrific family movies for the upcoming Christmas holidays – the animated Coco and the live action Paddington 2.  Unfortunately, Ferdinand isn’t on the same level when it comes to big laughs and engaging storylines.  Aside from Ferdinand the Bull and Lupe the Goat, none of the characters offer much in the way of interest.  They’re filling gaps in the story until it reaches its inevitable conclusion.

The film does have its highlights.  Most would be familiar with the saying that they’re as clumsy as “a bull in a china shop”.  We get to see how that situation plays out in reality when Ferdinand finds himself stuck in such a store while trying to evade some not-so-nice individuals.  There’s another cute moment when he sneaks around while gate crashing a flower festival.

As tends to be the case in the world of animated features, the voice cast features some recognisable names – John Cena, Kate McKinnon, Anthony Anderson, Bobby Cannavale and American footballer Peyton Manning.  It’s a shame the script isn’t as memorable.