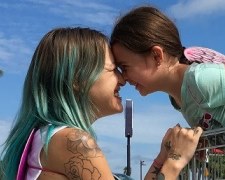 Kids across the globe (and a few adults too) yearn to travel to Walt Disney World in Orlando, Florida.  If you visit their website, you can plan the ultimate family vacation and “create memories for a lifetime”.  Whether you agree with their tagline or not, the park in Florida and others around the world are widely referred to as “the Happiest Place on Earth.”

Orlando, Florida serves as the setting for this new film from writer-director Sean Baker (Tangerine) but it offers a very different view of life in the United States.  It’s the story of an adventurous 6-year-old, Moonee (Prince), and her unemployed young mother, Halley (Vinaite).  They live a stone’s throw away from the famous theme park but their life is anything but paradise.

With no home and next-to-no money in the bank, they reside in a tacky, rundown motel ironically called The Magic Castle.  The charge is $38 per night which Halley continually struggles to pay on time to the hotel’s manager, Bobby (Dafoe).  Trips to the unemployment office are fruitless and with no viable alternatives, Halley buys wholesale perfumes and hawks them off to wealthier folks on street corners and carparks.  The cash she earns, coupled with free leftovers from a nearby fast food restaurant, keeps her a millimetre above the poverty line.

In the same vein as a great Mike Leigh drama (Secrets & Lies, Another Year), The Florida Project is an observational piece with no clear narrative structure.  There’s no shock twist or huge personality transformation.  We watch these people go about their daily lives and see how they make the best of a bad situation.

This approach from director Sean Baker won’t satisfy everyone as evidenced by the number of walk outs at the preview screening I attended.  I guess some would prefer a lightweight action blockbuster as opposed to this harsh dose of reality that highlights the widening gap between rich and poor in the United States.  Whilst these characters are far from perfect, it’s hard not to feel empathy for their plight.  Desperate people do desperate things.

7-year-old actress Brooklynn Prince has been showered with praise for her amazingly natural performance as Moonee.  She’s a kid acting like a kid.  It looks entirely improvised and so I was surprised to learn that most of it was scripted (she has a great ability to learn lines).  Bria Vinaite is unrelenting as the emotional mother.  An intriguing element is the way the film delves into child psychology with Moonee closely imitating her mother’s vocabulary and personality – often to a fault.

I saw someone remark on Twitter that the motel deserves a nomination for best supporting actor given it has such a strong, distinctive presence in the film.  You’ll know what I mean once you’ve seen the film.  The bright purple paint masks the troubled lives of the motel’s residences.  Rightly or wrongly, the hotel is likely to lose to Willem Dafoe who has already picked up a slew of awards for his subtle performance as the hotel manager.  He has a tough exterior but there’s a softer, protective side that comes through when the time is right.

Ending on an unusual note, The Florida Project may take a little time to sink in but it’s a commanding character study that will hopefully open eyes.