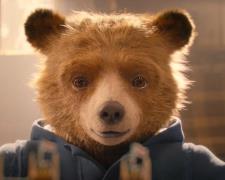 Paddington Bear is the fun-loving creature from deepest, darkest Peru who was created by English author Michael Bond in the 1950s.  He wears a duffle coat, walks around with an old suitcase, and has a penchant for marmalade.  He’s cute, he’s polite and he’s charming.  He’s one of the nicest characters you’re likely to encounter in children’s literature.

It will therefore come as a surprise to learn that Paddington (voiced by Ben Wishaw) spends half of this new movie in a maximum security prison surrounded by some of Britain’s worst criminals.  It may sound farcical on paper but this film takes a few interesting turns and is better for it.  It’s easily one of the best family releases of 2017.

The first movie ended with Paddington being taken in by the loving Brown family in Windsor Gardens, London.  As this instalment begins, we learn that Mr Brown (Bonneville) has a few work dramas, Mrs Brown (Hawkins) is preparing to swim the English channel, Judy is about to start a school newspaper, and Jonathan is looking for other interests outside his love for steam trains.

As for Paddington, he’s looking to buy a present for his aunt from Peru who is about to celebrate her 100th birthday.  In an antique shop, he comes across a beautiful pop-up book that features landmarks of London which he thinks will be the perfect gift.  It’s not cheap and so he gets his first job – a window cleaner for commercial and residential buildings in the neighbourhood.

Paddington doesn’t realise it but there’s a sinister individual looking to also get his hands on the pop-up book.  Phoenix Buchanan (Grant) is a washed up actor who now makes a meagre living by starring in dog food commercials.  Realising the book has great value, he steals it from the antique shop and frames Paddington for the crime – hence why our beloved bear has been sentenced to 10 years in the slammer.

Paddington 2 is a delightful comedy that can be enjoyed by anyone of any age.  The storyline is easy to follow and it’s filled with plenty of jokes for both kids and adults to enjoy.  Hugh Grant is a wonderfully cool villain who uses an array of humorous costumes to evade capture (plus there’s a part where he eats dog food).  Peter Capaldi (The Thick of It) is the film’s other grinchy character – a cranky man who doesn’t like bears living in the community.  His inclusion allows writer-director Paul King (The Mighty Boosh) to push the important themes of inclusion, diversity and acceptance.

As bizarre as it sounds, the film’s best moments take place within the walls of the prison.  Paddington finds a way to leave his own mark on the facility and becomes friends with people he may never expect.  First and foremost is the frustrated chef (played by Brendan Gleeson) who won’t be publishing a cookbook any time soon.

Most sequels feel inferior to the original but this is a rare case where that isn’t true.