Review: Call Me by Your Name 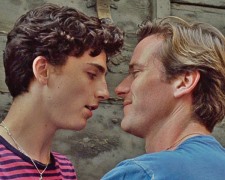 Ten years ago, acclaimed Italian director Luca Guadagnino (A Bigger Splash) was approached by long-time friend Peter Spears and asked for advice.  Spears had recently acquired the cinematic rights to the novel Call Me by Your Name but was struggling to work out where the film should be set.  Events clearly take place in Italy but author André Aciman provides no further information about the location of the towns and landmarks referred to throughout.

Guadagnino read the book, loved it immensely and realised it was set in Bordighera – a town in north-western Italy which lies along the Mediterranean coast and is a short drive from the French border.  He wrote a report back to Spears and moved on to his next directorial project – the gorgeous drama I Am Love.  It earned a Golden Globe nominee for best foreign language film and was of my “top 10” releases of 2010.

Unfortunately for Spears and his producing partners, Call Me by Your Name sat in “development hell” for several years.  They couldn’t settle on a workable script and find a director with the right vision.  It wasn’t until 2014 that Guadagnino came back on board to help Oscar nominated writer James Ivory (The Remains of the Day, Howards End) with the screenplay and he was ultimately convinced to take on director duties as well.  By shooting the film in his home city of Crema, an added perk for Guadagnino is that he could sleep in his own bed each night.

Now that we can enjoy the finished product, Call Me by Your Name is a stunningly beautiful drama set in 1983 and centred on Elio (Chalamet) – an introverted 17-year-old trying to make the most of the summer holidays in a quiet, relaxing, sleepy Italian town.  He reads books, listens to music and swims in the river but there’s not much else on offer.  When asked “what does one do around here?”, Elio’s response is simple – “wait for the summer to end.”

That answer changes with the arrival of Oliver (Hammer) – an extroverted 24-year-old American student who has been invited by Elio’s father (Stuhlbarg), a renowned archaeological professor, to stay at the house for six weeks to assist with his studies.  Oliver has a natural, endearing charm that lights up a room.  He can walk into a bar or café and make friends with anyone.

It’s clear that Elio has both a physical and intellectual attraction to Oliver.  He’s an incredibly smart, well-read kid but he confesses to knowing very little about “the things that matter”.  To break it down as simply as possible, he yearns to experience love and intimacy but his shy nature has always held him back.  Oliver detects that vibe in Elio but is unsure how to handle the situation.  Is it appropriate to seduce the son of his college professor when staying at his house?

Timothée Chalamet (Lady Bird) gives the performance of a lifetime and is destined for a long career in Hollywood (as well as his first Oscar nomination).  He’s so relaxed and natural throughout.  His powerful final scene is impossible to forget.  Armie Hammer (The Social Network) impresses with his supporting role but it is Michael Stuhlbarg (A Serious Man) who almost outshines them both as Elio’s astute, laidback father.  He delivers a monologue in the later stages that will be quoted for many years to come.

If there’s been a better film released during 2017, I haven’t seen it.