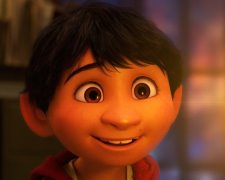 There is a belief by the people of Mexico that you die three times.  The first is when your heart stops beating.  The second is when you can no longer be seen – the point where you’re buried or cremated.  The third, and perhaps this is the saddest, is when there is no one left alive who can remember you or your story.

It’s for this reason that one of the biggest holidays of the year in Mexico is Día de Muertos, better known in English as the Day of the Dead.  It is held each year between October 31 and November 2 and is a celebration of friends and family members who have passed away.  Many set up altars in their homes with are adorned with photos of the deceased as well as food, flowers and candles which serve as an offering.

Coco is centred on this Mexican tradition and writer-director Lee Unkrich (Toy Story 3) admitted to being nervous given he is not of Mexican or Latino descent.  It’s why he engaged a wide range of consultants to make sure it is culturally accurate and epitomises everything that the iconic holiday stands for.

The protagonist is Miguel (Gonzalez) – a 12-year-old loves music and yearns to be a great guitar player.  Unfortunately, his family have a much narrower view of the world.  All forms of music are banned in the household because of silly grudge that’s been passed down from generation to generation.  Rather than follow his dreams, it’s strongly expected that Miguel will follow his parents’ footsteps and become a shoemaker.  It’s the last thing he wants.

Miguel runs away from home and in the process, is magically transported into the Land of the Dead.  It may sound morbid but it’s a sophisticated, fun place where the deceased (who take the form of skeletons) live similar lives as they did previously.  There’s a catch though.  Once the last person who remembers you passes away in the Land of the Living, you disappear from the Land of the Dead and are never seen again.

Miguel’s brief foray into the afterlife puts him on a journey to locate and meet Ernesto de la Cruz (Bratt), a very famous musician who he believes is his great-great grandfather.  He is guided by Héctor (Bernal), a not-so-well known skeleton who knows that he’s almost been forgotten on Earth and that his days are numbered.  In return for his help, Miguel agrees to place a photo of Héctor on an altar when he returns back home to ensure his memory remains.

As we’ve seen with films such as Inside Out, Up, WALL-E and Toy Story, the brilliant writers at Pixar Animation Studios keep coming up with fresh, wonderful original stories.  They don’t follow the mould of other animated features and they don’t flog the same themes again and again.  This is a beautifully touching tale that has a lot of say about celebrating the past and why me must remember those who have come before us.  It’s a creative family film with a strong emotional core.

Unkrich and his animation team also deserve praise for the way they have brought the Land of the Dead to “life”.  This is the first time we’ve seen walking, talking skeletons in a Pixar film and they look really cool (as opposed to creepy).  They make such a distinctive sound as they move around their bones bump up against each other.  The backgrounds are bright, colourful and there’s a great film score from Michael Giacchino (Up) that tugs on the heartstrings when the time is right.

I was struggling to pick my favourite animated feature of 2017 but with Coco sneaking into Australian cinemas just before the end of the year, the choice has become simple.