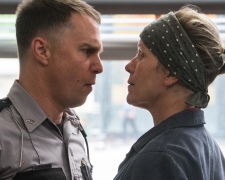 It’s a great, intriguing title for a movie and Three Billboards Outside Ebbing, Missouri is quick to set the scene.  Seven months ago, the daughter of Mildred Hayes (McDormand) was abducted, raped and killed in a small American town.  In the time that has since passed, the local police, headed by Sheriff Bill Willoughby (Harrelson), have found no tangible evidence and identified no possible suspects.

A frustrated Mildred then walks into the town’s advertising business and rents three old billboards.  They haven’t been used since 1986 and are on a quiet road that almost no one travels down.  The billboards read – “Raped while dying”, “Sill no arrests?” and “How come, Chief Willoughby?”

They definitely make an impression.  It’s not long before local media picks up the story of the billboards and attention is drawn to the inaction of the police officers.  Mildred accused them of being more interested in torturing black folks than solving crimes.  With a tough disposition and an extraordinarily foul mouth, she is dealing with her grief in a rather unorthodox manner.

Those that have seen the last two films of British writer-director Martin McDonagh will know that he has a warped, dark sense of humour.  In Bruges was the story of two hitman who bicker while stuck in the famous Belgian city.  Seven Psychopaths was about a struggling writer drawn into a world of crime after his best friend started kidnapping dogs.  They’re both terrific black comedies that give the Coen Brothers a run for their money.

I cite those films to provide a reference for what to expect in Three Billboards Outside Ebbing, Missouri.  This is McDonagh’s darkest effort yet.  You won't know whether to laugh openly or curl up with horror.  He wants to make us feel uneasy by putting his protagonists through a number of moral quandaries.  There are several twists and your opinion of the characters will change throughout.

You could be confused in thinking this is a Quentin Tarantino flick given the verbal and physical abuse dished out by the cast members.  There’s a great scene where Mildred berates a priest who pays an unexpected visit.  That said, it’s hard to pick a highlight given there are so many examples to choose from.  It seems every character gets a chance to hurl a vicious insult at another.

The film is at its best when it’s trying to be funny.  It’s not as good when it’s trying to be serious.  I think McDonagh has something to say… but I’m not quite sure exactly what that is.  I’ve been stewing on it for a few weeks and it’s still hard to reconcile the actions of certain characters.  This is best illustrated by Sam Rockwell who plays a reckless, racist police officer.

Winner of the prestigious Audience Award at the 2017 Toronto Film Festival, Three Billboards Outside Ebbing, Missouri may take multiple viewings to fully dissect and appreciate.