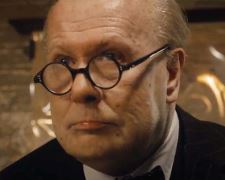 Presidents, prime ministers and other world leaders have to make many difficult decisions as part of the job.  Their views on economic, social, environment and political issues will often shape society for many decades to come.  That said, perhaps the hardest decision for any leader to make is war.  Darkest Hour is a historical drama that spans only a few weeks in the year 1940 and looks at what went on behind closed doors before Prime Minister Winston Churchill (Oldman) declared war against Germany.

Churchill wasn’t held in high regard within his own party.  In fact, you could argue that he became Prime Minister by default following the resignation of Neville Chamberlain (Pickup) who had fallen out of favour with the public during the early days of World War II.  Lord Halifax (Dillane), serving as Foreign Secretary, had been tipped as Chamberlain’s successor but he wasn’t interested either.  Churchill ultimately took the mantle but given his country was at the brink of war, he describes it to his wife (Thomas) as “revenge” as opposed to a “gift”.  It’s as if his enemies within the party were setting him up to fail.

This film is timely given the release of Christopher Nolan’s Dunkirk back in July.  That movie featured no politics whatsoever and was about a group of heroic soldiers and civilians who rescued more than 300,000 British troops from the French coast and returned them safely back to Britain.  Darkest Hour is set during the same time frame but from an entirely different perspective.  Aside from a handful of quick battle scenes (which are actually quite clunky), we see how Churchill sneakily organised the Dunkirk evacuation to take place from his underground bunker in London.  These two movies would make a cool double feature.

It’s the politics of the film which are most interesting.  Churchill believed the only way forward was to go to war with Germany.  British soldiers had already been killed fighting in France and he sensed that Hitler would never agree to a meaningful truce with Great Britain.  There’s a great line in the movie where he shouts “you cannot reason with a tiger when your head is in its mouth.”

Other members of Churchill’s personally selected War Cabinet had a different view.  Having been through the horrors of another great war two decades earlier, they felt that the public didn’t have the appetite to see another generation of young men killed in battle.  Their suggestion was that peace talks should be orchestrated with Germany through an intermediary in Italy.  If Churchill didn’t agree, they would resign and destabilise the government.

Gary Oldman (Tinker Tailor Soldier Spy) is favoured to win the Academy Award for best actor and he ticks many boxes with his stellar performance.  He’s unrecognisable thanks to the work of the gifted make-up artists who spent four hours every day in getting him ready.  Churchill was a confident man with a sly sense of humour but through Oldman’s performance, you also sense his doubts and weaknesses.  The best scenes in the film are those where he converses with King George VI (Mendelsohn) in the days and weeks after taking power.

The female characters in the film aren’t given as much to work with.  Kristin Scott Thomas (The English Patient) pops in and out of the story as Churchill’s wife but has little to offer except moral support.  Lilly James (Cinderella) plays Churchill’s personal secretary but spends most of her time sitting at a desk typing letters.  There’s a slight twist to her character which is obvious from the midway point and so doesn’t have the strong impact it should when fully revealed later.

There’s no argument that this is a polished production from director Joe Wright (Atonement).  There’s a bold film score from Oscar-winning Italian composer Dario Marianelli (Atonement) and the set decorators and costumers deserve praise in recreating key locations such as the inside of Buckingham Palace and the House of Commons.

Above all though, Wright wanted to get break some of the longstanding myths surrounding Winston Churchill and show him as a “deeply flawed, profoundly complicated” man who, despite those misgivings, played a huge part in saving the world.  I like Wright’s quote that “our flaws and our virtues are kind of the same thing.”  It’s a message that resonates strongly throughout the film.