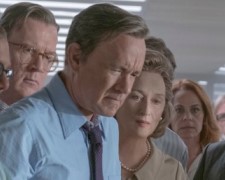 Steven Spielberg has made a bunch of movies that have covered a wide range of subject matters and genres.  He may not have known it when he signed up for it at the start of 2017 but The Post comes along at an important time given the pressure currently being applied on the media by President Donald Trump.  The term “fake news” is part of common vernacular.

Written by Liz Hannah and Josh Singer (Spotlight), the film is set over a few days in 1971 when those at The Washington Post had a big decision to make.  One of their major competitors, The New York Times, had been provided with classified military documents that showed the U.S. Government had been lying for decades about its involvement in the Vietnam War.  These documents became known as the Pentagon Papers.

After months of careful analysis, The New York Times went public in June 1971.  They published a series of front page articles that were highly critical of the government.  This infuriated President Richard Nixon who successfully sought a court injunction to prevent any further release of the leaked information until it could be settled in the Supreme Court.

It was at this time that The Washington Post, through the work of their own investigative journalists, came into possession of the same papers.  What followed was an intense debate about what to do next.  The role of a newspaper is to keep people informed and to hold people to account.  If they sat on this information and did nothing, were they really doing the right thing by the American people?  However, if they did go public, they ran the risk of a lawsuit or, even worse, imprisonment.

We see things from a number of perspectives in this huge ensemble.  Meryl Streep plays the head of the paper who is worried about her family’s legacy and the long-term future of the paper.  Tom Hanks plays an executive editor who is keen to make his mark and outsmart his competitors.  Bob Odenkirk plays a journalist who battles the clock in recovering the papers and writing a story.  Bradley Whitford plays a board member at The Washington Post who believes the recent listing of the company on the stock exchange could be in jeopardy.

There’s no arguing that this is a Steven Spielberg film.  As tends to be his style, he’s pushing an agenda quite forcefully on the audience.  This will work for some but will annoy others.  As an example, there’s a scene late in the movie where a young woman thanks Meryl Streep’s character for being a pioneer when it comes to women in senior workplace roles.  I don’t disagree with that message… but it didn’t need to be reiterated.  It’s obvious from everything that preceded it.  The film also has a few too many grand speeches and so the dialogue feels more forced than natural.

That’s not to say this isn’t an important movie.  It’s a fascinating tale that highlights the need for a strong media and how they should serve the people and not the government.  It touches on workplace dynamics and the additional challenges faced by a female CEO in the 1970s.  It looks at the difficulty of journalists being objective in their reporting when they’re good friends with their subject matter.  They’re all topics which have equal relevance today.  An added touch is we see how papers were typeset and printed each night without the benefit of digital technology.  It’s cool.

They’re two iconic American actors but The Post marks the first time that Meryl Streep and Tom Hanks have appeared opposite each other on screen.  Both give strong performances with illustrate the strengths and weaknesses of their respective characters.  Streep is particularly good as the vulnerable head of the paper who realises that she’s out of her depth but isn’t quite sure who’s advice she should be taking.

Likely to be mentioned several times when the Academy Award nominations are announced in two weeks, The Post is good (but perhaps not great) cinema.