Review: The Shape of Water 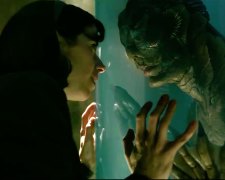 The Shape of Water is described on the Internet Movie Database as – “In a 1960s research facility, Elisa, a mute janitor, forms a relationship with a mysterious aquatic creature.”  I’ve provided this simple plot overview to friends and have received many puzzled looks in return.  It sounds bizarre on paper but it’s being pitched as an “adult fairy tale” so you don’t need to stress about everything making sense.

That’s probably a good thing because there are questions asked in The Shape of Water which are not answered.  To start out with, where did this human-like sea creature come from?  It’s clearly a major discovery but those at the top-secret military facility are unsure what to do with the “asset”.  Dr Robert Hoffstetler (Stuhlbarg) is a scientist who wants to study the creature but on the flip side, the security team headed by Richard Strickland (Shannon) thinks it best that it be killed.

It’s the actions of these two characters which are the most difficult to reconcile.  Strickland gets a surprisingly large amount of screen time as the film’s keynote villain.  We even follow him to his home and get a glimpse of his family.  Why he has no interest in the creature and its potential scientific value is odd.  That said, at least we know what he wants.  Dr Hoffstetler has a softer side but I never fully understood how he reached his position on certain issues (without giving too much away).

Where the film succeeds is the exploration of the relationship that develops between the creature and Elisa Esposito, a cleaner (Hawkins) who has been a mute all of her life.  She lives alone, has few friends and whilst she puts up a brave face, you get a clear sense that she’s frustrated by her disability.  It’s hard to make new friends and fall in love when you have no voice.

That helps explain her attraction to the sea creature.  She meets it while cleaning its laboratory and with both of them unable to speak, they communicate using expressions and hand gestures.  The creature shows remarkable intelligence and it’s not long before they form a close bond.  However, when she learns that her newfound love is to be killed, she calls in favours from a fellow cleaner (Spencer) and her next-door neighbour (Jenkins) to help save his life.

Writer-director Guillermo del Toro has never been a conventional filmmaker.  We’ve seen from the likes of Cronos, Pan’s Labyrinth and Crimson Peak that he has a rich, vivid imagination that creates beautiful cinematic worlds.  That’s again the case here.  The Shape of Water is a wild ride that provides many unexpected, eye-raising moments.  The opening scene with Sally Hawkins in the bathtub is a great example.  The film score of Alexandre Desplat (The Grand Budapest Hotel), which features both light and dark moments, is a perfect fit for the material.

Whilst I love what he’s trying to achieve, some of the subplots didn’t resonate.  There’s a storyline that involves the next-door neighbour, his work and unrequited love but it feels inferior to the main show.  The same applies for Dr Hoffstetler and his connection with others outside the laboratory.  These narratives didn’t hit me emotionally.

Given the film has been nominated for 7 Golden Globe nominations and a bunch of other critics prizes, I’ll admit to being in the minority with my lukewarm response.  Perhaps another viewing is in order.