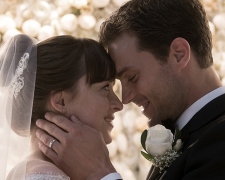 And… another movie trilogy comes to a close.  Whilst the Fifty Shades franchise won’t be held in the same vein as The Godfather, The Lord of the Rings, Star Wars, The Dark Knight and Toy Story, its loyal fans won’t care too much.  Many were lured by the novels written by E.L. James whilst others were intrigued by the idea of a fairy tale romance with a bit of kinky sex thrown in.

The film begins with what is the first in a series of musical montages.  After popping the question during the last instalment, we see Anastasia Steele (Johnson) and Christian Grey (Dornan) getting married as the opening titles slip by.  We’ve got the wedding ceremony, the first dance, the well-attended reception and the lavish honeymoon all ticked off inside of 5 minutes.

You may think that it’s rushed to help get to the meatier part of the story but there’s not a lot going on here.  The opening half will only further heighten the dreams of those who yearn to be rich and famous.  Anastasia and Christian go mansion shopping and engage a world renowned designer.  They drive around town in high-speed million dollar cars.  They hire security guards and assistants to be at their beck and call 24 hours a day.  It’s nice work if you get it.

There are splashes of tension during the early scenes (e.g. Anastasia wants to keep using her maiden name at work) but things ramp up during the second half with a cheesy, cliched storyline that looks borrowed from an episode of Neighbours or Home & Away.  It’s a weak, rushed attempt to great drama and on breaking it down, doesn’t make a lot of sense.  Brace yourself for kidnappings and high-priced ransoms.

Whilst I’ve never really been a fan of the series and its weak narratives, I have always applauded the idea of making a romantic drama where the characters do things a little differently in the bedroom.  Unfortunately, the freshness that laced the original movie isn’t there this time around.  There’s more than enough nudity and sex scenes (perhaps more so this time) but it’s less likely to get people talking.  Arguably, those that enjoy unorthodox love stories would be better served by watching Phantom Thread, the Oscar nominated film from Paul Thomas Anderson released last week.

The acting here isn’t great and I’m confident that stars Dakota Johnson and Jamie Dornan will be looking to bank their final pay cheques and move onto more exciting, more challenging projects.  Their profile has certainly received a boost.  Looking at the broader ensemble, it’s amazing how uninteresting everyone seems.  No one stands out and we’re treated to dull storylines involving flirtatious work colleagues, not-so-diligent security guards, and other socialising friends.  I wish I knew the safe word so I could escape the cinema early.