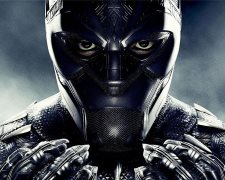 We’ve seen black superheroes before such as Blankman (1994), Steel (1997) and Blade (2004) but Blank Panther still marks an important milestone in terms of the genre.  Never before have we seen a superhero flick with so many black actors getting a chance to shine.  Of the 10 actors shown on the film’s poster, only two are white.  Arguably this movie should have been made long before now but it’s still great to see Marvel putting up $200 million to launch this new franchise.

The choice of director raised eyebrows when announced two years ago but hindsight shows it to be an excellent choice.  Ryan Coogler is a Californian-born with just two previous credits to his name.  He burst onto the scene in 2013 with Fruitvale Station, a low budget independent film that premiered at Sundance and told the true story of a 22-year-old African American who was killed by police in Oakland.  He followed that up with Creed, a reboot of the Rocky franchise that saw Sylvester Stallone pick up an Oscar nomination as the boxing coach of a young guy with big dreams.

If there’s a weakness in Black Panther, it’s the battle to pack so much story inside of two hours.  I was a little confused by the opening act as we’re introduced to all the characters and given a brief history lesson.  To do my best to explain… there’s a fictitious country in central African known as Wakanda.  It’s thought of as a third world country but what many don’t know is that it is home to a powerful, alien-sourced metal known as vibranium.  They keep the metal hidden and mask their true wealth so as not to be targeted by neighbouring countries.  It’s not a bad strategy.

Those living Wakanda harvest the metal and use to create technology that eclipses anything else available in the world.  This is where our hero comes in.  The King of Wakanda, otherwise known as the Black Panther, drinks a special potion which gives him near-invincible powers.  He rides around in an invisible spacecraft and wears a latex-like suit that can repel any bullet or any punch.  All of these are thanks to the magic that is vibranium.

With the introduction out of the way, the film then has the chance to explore some worthy themes.  The current King/Black Panther (Boseman) is being questioned by his shrewd girlfriend (Nyong’o) about his plans for the country.  With so much poverty in the world, she thinks it’s time to reveal the true Wakanda and use their wealth to help others.  The King isn’t so sure and sees his role as one of protecting his fellow citizens.  The parallels with Brexit and Trump’s America are clear.

There’s more than that going on.  A boisterous South African arms dealer (Serkis) is looking to steal some vibranium and sell it on the black market.  A young man from California (Jordan) learns of his Wakandan heritage and travels to Africa in search of answers and power.  Leading tribes people in Wakanda are forced to pick a side when the King’s views are challenged.  Do their loyalties lie with the man or the throne?  There’s a lot of cool stuff here.

Laced with political messages, Black Panther is a film to be admired for its rich, compelling story.  There are a few neat twists and you’re never quite sure what’s around the corner.  Further, there’s no clear “good” and “evil” as several of the key characters illustrate both traits.  If you’re going along just for the action, you won’t be disappointed either.  Coogler has created some intense battle sequences that are light-on in terms of special effects and editing.

The casting can’t be faulted either.  We’ve got veterans like Forest Whitaker (The Last King of Scotland) and Angela Bassett (What’s Love Got to Do with It) working alongside terrific young actors such as Chadwick Boseman (Get on Up) and Lupita Nyong’o (12 Years a Slave).  Everyone will have their favourites but in my eyes, it’s Michael B. Jordan who impresses most as the film’s intriguing quasi-villain.  He comes complete with a commanding presence and a trend-setting hairstyle.  It’s also interesting to note that of the three films Coogler has made, Jordan appears in all three.  They clearly have a great working relationship.

I’m not alone in my positive words for Blank Panther and given the hype that is quickly building, this has the potential to be one of the biggest Marvel films yet.