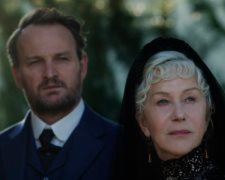 In doing a little background reading before seeing Winchester, I was fascinated by the true story on which it is based.  Oliver Winchester lived in Baltimore during the mid-1800s and created the Winchester Repeating Arms Company – an extremely profitable business that sold lever-action rifles.  Oliver died in 1880 at the age of 70 and then one year later, his only son, William, passed away due to the effects of Tuberculosis.  As a result, William’s wife, Sarah, inherited roughly $20 million as well as a 50% stake in the company.

Three years later, Sarah moved to San Jose, California and bought an unfinished house along with 161 acres of farmland.  Using her immense wealth, she commissioned a series of renovations and extensions to her new home.  It’s at this point where things start to get rather strange.  The renovations continued for 38 years with Sarah seemingly never satisfied with the work performed.  At the time of her death, there were roughly 160 rooms including 40 bedrooms, 13 bathrooms, 47 fireplaces, and 17 chimneys.

It gets weirder.  Because the house had been built in such a haphazard manner with no formal plan, there were design features that made no logical sense.  Stairs went nowhere, doors opened up into blank walls, and windows overlooked other rooms.  Sarah also had an obsession with the number 13.  An expensive chandelier had room for 13 lit candles, clothes hooks were always placed together in groups of 13, and the drains in the sink contained 13 holes.  If you believe the rumours, this was all because that Sarah Winchester believed the house was haunted by the ghosts of those killed by firearms purchased from the Winchester Repeating Arms Company.

What excites me most of all is that the house still stands today.  If you’re ever visiting San Jose and have $39 USD to spare, you can get an hour-long tour that takes you inside 110 of the 160 rooms.  It has attracted more than 12 million visitors and it’s a place I’d love to visit myself one day.  It’s certainly a “truth is stranger than fiction” kind of tale.

All of it sounds like a great idea for a movie which is where Peter and Michael Spierig enter the frame.  They were born in Germany but moved to Australia with their parents at the age of 4.  They few up in Brisbane, went to the Queensland College of Art, and have made some worthy thrillers including Undead, Daybreakers and Predestination (a personal favourite of mine).  In putting together the cast for Winchester, they enlisted Oscar-winner Helen Mirren (The Queen) along with a bunch of fellow Aussies delivering their best American accents – Jason Clarke (Everest), Sarah Snook (The Dressmaker) and Angus Sampson (The Mule).

In terms of the narrative, it revolves around a doctor (Clarke) who has been recruited by the Winchester Repeating Arms Company to perform a medical assessment of Sarah Winchester (Mirren).  Given the bizarre house and the stories circulating about ghosts and spirits, the Board of the company don’t believe Sarah is of sound mind and body.  They assume the doctor will come back with a negative evaluation and this can be used to sever her involvement with the company.

What follows is a formulaic, ho-hum horror-thriller.  The doctor goes through the whole routine of denying the existence of ghosts but changes his tune when strange things start happening in the house.  Things get more extreme with each passing scene and we end up at a point where we’ve got possessed children, objects mysteriously being flung across the room, creepy noises, and equally creepy ghouls.  We’ve seen it before and we’ll see it again.

Given the way it is shot and the way the story plays out, it never feels scary and never makes the most of the intriguing setting.  The house is more interesting than any individual – and even it gets a bit boring after the opening hour.  It’s the same sort of thing from scene-to-scene with Helen Mirren trying to act mysterious, Jason Clarke searching for a personality, and a bunch of dull supporting players grasping for attention.  This is a cool idea for a movie but it’s not well executed.