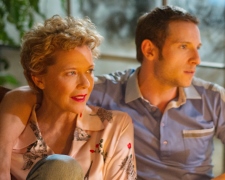 When asked about my favourite films of all time, one I always include is Billy Elliot.  Released in 2000, it was the story of an 11-year-old boy from England who, against his father’s wishes, takes ballet classes instead of boxing classes.  Infused with a narrative about the famous coal miners’ strike in the mid-1980s, it was beautifully written by Lee Hall and perfectly directed by Stephen Daldry.  Both earned Academy Award nominations for their impressive work.

The reason the movie springs to mind is that Film Stars Don’t Die in Liverpool marks the first time since Billy Elliot that Jamie Bell and Julie Walters, who both won BAFTA Awards for the earlier film, have appeared together on screen.  This is a very different film with very different characters but I still had a smile on my face watching them interact during one of the opening scenes.

Directed by Scotland-born Paul McGuigan (Wicker Park, The Wrong Man), Film Stars Don’t Die in Liverpool is based on the memoir of Peter Turner and chronicles his interactions with American film star Gloria Grahame during the final two years of her life between 1979 and 1981.  For those unfamiliar with Grahame, she was a Hollywood starlet who appeared in a number of big films in the 1950s including Sudden Fear, Human Desire and Oklahoma!  The high point of her career came in 1952 when, as a budding 29-year-old, she won an Oscar for her performance alongside Lana Turner and Kirk Douglas in The Bad and the Beautiful.

The years that followed weren’t as successful.  She struggled to land good roles on screen and on the stage.  McGuigan’s film picks things up in the late 1970s.  Grahame (Bening) is now in her mid-50s, living alone in London, and furiously searching for any kind of paying role in the theatre.  She’s recognised from time-to-time but it’s clear that the name Gloria Grahame has been all but forgotten.

It’s at her apartment building where she first meets Paul Turner (Bell), a young man who has lofty dreams himself of becoming an actor.  He knows very little of Grahame’s past but the two form a friendship which develops into something a little deeper.  Those close to them have differing views about the noticeable age gap between the pair.  His mother (Walters) offers loving support but her mother (Redgrave) is inherently sceptical.

The fact this is based on a true story creates an added layer of interest than what we’d normally expected from a romantic drama.  I knew nothing of these individuals beforehand and so it serves as an eye-opener and a fitting tribute.  Having done some subsequent research and looked at a few Gloria Grahame clips on YouTube, I have a stronger appreciation for Annette Bening’s superb leading performance.  Jamie Bell is also great in the subtler, less-showy role.

My attention waned ever so slightly during the middle stages but Film Stars Don’t Die in Liverpool is a warm, heartfelt drama about the dreams we chase and the people who shape them along the way.