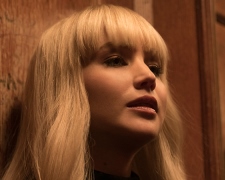 Red Sparrow marks the fourth time that Oscar winner Jennifer Lawrence (Silver Linings Playbook) has worked with director Francis Lawrence (no relation) but it’s the first time that they’ve collaborated outside of the successful Hunger Games franchise.  It’s clear from the outset this is a different film and a different genre.  It’s based on a fictional spy novel written in 2013 by Jason Matthews, a former CIA operative himself.

While the film is set largely in Russian, the characters all speak English with heavy Eastern European accents.  It’s a compromise filmmakers often reach so as to create a believable setting but not alienate those who hate subtitles.  In the lead role, Lawrence plays Dominika – a successful ballet dancer who saw her career cut short after a sickening on-stage accident.

It’s at this point where we stumble to Bourne Identity type territory.  Desperate for work to care for her ailing mother, Dominika is guided by her powerful uncle (Schoenaerts) and enlists in a secretive spy school.  She is given a new identity and told by her emotionless teacher (Rampling) that she must forget her past and all her personal details.

The school trains its cadets to become “Red Sparrows”.  They aren’t trained to be ruthless assassins.  Rather, they have been selected for their beauty as much as their strength.  Their job is to seduce people, exploit their weaknesses and extract valuable information that can be used by the state.  Dominika aptly refers to it as “Whore School” but the big wigs who govern the school believe it will help Russia back on top when it comes to global espionage.

She seems rather underdone in terms of training but Dominika is soon given her first assignment.  An American CIA agent (Edgerton) has been working in the country and is known to the Russians.  That itself is not a huge issue.  The problem is that he’s receiving obtaining government secrets from a mole inside the Russian military.  Dominika’s job is to gain the trust of the CIA agent and get him to spill the beans.

Clocking in at a lengthy 2 hours and 20 minutes, Red Sparrow is pitching itself as a slick spy thriller where the audience isn’t quite sure who can be trusted.  It’s an intriguing screenplay with a few subplots lurking in the background but it never quite fulfils its promise.  Dominika’s character is the hardest to reconcile.  There are moments where she has a sixth sense and an IQ of 200 but other moments where she lacks the knowhow of a teenager.

The graphic nature of the material might also catch a few in the audience off guard.  The film snuck through with an MA rating here in Australia despite having “strong themes, violence, sexual violence, sex scenes and coarse language.”  I’ve no issue with the nudity but some scenes are particularly violent.  Francis Lawrence doesn’t let us off with soft camera angles or fast paced edits.  These characters dish out a very strong brand of “justice”.

There are parts of the storyline to be admired such as the early interaction between Dominika and the CIA agent.  Both are using each other but can it be a win-win situation for them both?  The unusual training school also gets you thinking about the many ways in which spies can infiltrate their targets.  I guess it’s worth a look for fans of the genre.