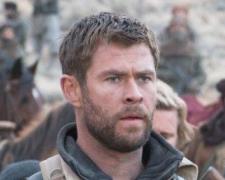 During my 25 years as a critic, I’ve been lucky to see so many great fictional tales that fit into the genres of comedy, drama, action, horror, romance, thriller and/or sci-fi.  All of that said, one genre that seldom needs to delve into worlds of fiction is war.  That’s because there are countless stories of real life heroes that need to be heard and appreciated.  In the past 5 years alone, we’ve been treated to Dunkirk, Hacksaw Ridge, Land of Mine, Unbroken, American Sniper, Lone Survivor and 13 Hours: The Secret Soldiers of Benghazi.

12 Strong continues in the same vein.  Based on the non-fiction book penned by Doug Stanton, the film takes to Afghanistan in the weeks following the terrorist attack that took place in the United States on September 11, 2001.  We follow a group of young soldiers who have teamed up with Afghan allies and are trying to reclaim critical cities and towns that have been claimed by the Taliban.

The U.S. side is led by Mitch Nelson (Hemsworth) – a confident but inexperienced Captain with limited experience in the field.  I’ll be blunt.  Part of me things he’s a courageous hero and another part thinks he’s a lucky fool.  He continually puts himself in harm’s way to complete the complex mission and protect his fellow soldiers.  Notable actors forming part of the ensemble include Michael Shannon, Michael Peña and Trevante Rhodes.

The most interesting part of the film is its exploration of the tactics adopted by the American military in Afghanistan.  They were outnumbered by the Taliban and had very limited knowledge of the terrain.  It may sound like a hopeless task but they had two key advantages over their enemies.  Firstly, they forged an alliance with General Dostum (Negahban), a respected leader in Afghanistan who had put together his own army to fight the Taliban.  Secondly, they had a number of American fighter planes at their disposal that could help bomb key targets once properly identified.

I don’t want to sound too disrespectful given this is actual events but screenwriters Ted Tally (The Silence of the Lambs) and Peter Craig (The Town) have diminished the material by using unnecessary clichés and plot devices.  There’s an early scene before Mitch heads to Afghanistan where he makes the firm promise to his wife that he’ll come home alive.  The film doubles down on that theme several times including a clunky scene where he refuses to write a letter to his family, despite other soldiers doing the same, before going into battle.  It’s borderline cringe-worthy.

The direction of Danish-born Nicolai Fuglsig is also rough around the edges.  He’s used a lot of different camera angles in crafting the key action sequences but editor Lisa Lassek has struggled to weave them into something suspenseful.  Shots from high above are mixed with shots from down low but it’s often hard to work out what’s going on and who’s attacking who.  Oh, and did we really need the footage of the stressed Taliban leader gazing across the battlefield and trying to look as villainous as possible?  It looks awfully fake.

12 Strong is a story worth telling but I’d have preferred that it ditched the clichés and replaced it with better dialogue.