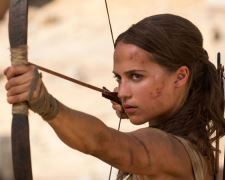 I have this mental image in my head of studio executives in Hollywood spinning a giant wheel to decide which old franchise should be dusted off and rebooted.  It seems that every big action series gets a second chance when the stars align and funds are available.  This time around, the winner is Tomb Raider.  Those old enough will remember the previous movies from 2001 and 2003 that were headlined by Angelina Jolie.  Whilst they were not revered by critics, they did just enough at the box-office to warrant their existence and satisfy fans of the video games.

Directed by Norwegian filmmaker Roar Uthaug (The Wave), this latest movie ticks off the character introductions during the opening act.  Lara Croft (Vikander) is a young woman who should be incredibly wealthy.  Her wealthy dad (West) was lost at sea 7 years ago and Lara was entitled to a substantial inheritance but she refused to sign the necessary paperwork to take control of her father’s assets believing that he would return one day.  The unusual life path Lara chose instead is a mix of boxing, cycling, and food delivery.

That changes when she discovers an underground bunker which contains information about her dad and his extensive research.  He was no ordinary individual.  At the time of his disappearance, he believed he had located the tomb of an ancient queen with supernatural powers.  A not-so-nice organisation, known as Trinity, have long been trying to get their hands on the tomb for villainous reasons which is why it needs to be located the protected by those with friendlier motives.

All of this background information takes Lara to Yamatai, a small island off the coast of Japan which is hidden on most modern day maps.  She learns she’s not alone with seconds of setting foot on the sandy shoreline.  A group of slaves and Trinity henchman, led by a bossy archaeologist (Goggins), are using every means possible to find the tomb’s location.  To use a cliché – she needs to stop them before it’s too late.

Academy Award winner Alicia Vikander (Ex Machina, The Danish Girl) is the best thing in this.  She provides the leading character with the right balance of strength and vulnerability.  Lara is not a superhero who feels no pain and can do no wrong.  She’s “put through the ringer” during most action scenes with the bruises, scars and scratches adding up.  Her ability to dodge bullets whilst running in the opposite direction is a stretch but hey, this is an action movie so I won’t argue too much.

I only wish the other cast members had as much charisma.  As the dodgy archaeologist working for Trinity, Walton Goggins (Django Unchained) is an uninspiring bad guy.  He complains about not having seen his family for many years and, as we don’t get to see who’s pulling his strings, has no obvious motives aside from that.  He’s not too smart either.  It’s apparent that key details have been omitted to set up plots for possible sequels but I only hope they have more interesting villains.

There’s a great sequence where Lara needs to extricate herself from a rusty plane perched precariously above a massive waterfall.  Aside from that, none of the action pieces were particularly memorable.  The writing team have tried to go with an Indiana Jones type finale (complete with tricks and booby traps) but it’s not as exciting as it sounds.  It’s rushed in places with even Lara making odd decisions to prolong the narrative (such as entering the tomb itself).

Taking a very serious tone throughout (don’t expect many laughs), Tomb Raider may be in need of another reboot.