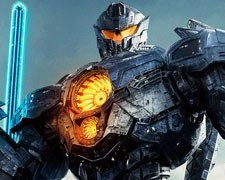 In a world where studios are playing it increasingly safe with sequels, reboots and well-established franchises, the 2013 release of Pacific Rim was a big gamble.  It cost roughly $200 million USD, it was a completely original screenplay, and it didn’t have any A-list Hollywood actors amongst its cast.  It didn’t perform particularly well the United States but it recovered its costs thanks to big business in China and other international markets.  Critics were impressed by the creativity and style brought to the movie by writer-director Guillermo del Toro (Pan’s Labyrinth).

The sequel went through several stages of on-again, off-again but in 2016, a script was finalised and a new director brought in.  With del Toro working on other projects, including his Oscar winning The Shape of Water, the reigns were handed over to Steven S. DeKnight, a writer-director best known for works on the smaller screen including Angel, Smallville and Spartacus.  Pacific Rim: Uprising marks his first feature film.

Given that I see more than 200 movies every year and am starting to show signs of old age, it’s helpful to see this film begin with a quick recap of the earlier movie.  Some huge alien monsters, known as the Kaiju, attacked the planet after travelling through a portal at the bottom of the Pacific Ocean.  Unable to be defeated using traditional weapons, countries around the world responded by building giant robots, known as Jaegers, to fight back.  Lives were lost and buildings were destroyed but in the end, the humans triumphed (as you’d expect).

Pacific Rim: Uprising picks up the narrative about 10 years later.  Major cities around the world are still being rebuilt.  Those from poorer backgrounds are forced to take refuge in heavily damaged neighbourhoods because there’s no alternative.  It’s here where we meet two new characters.  Amara (Spaeny) is a young woman who is collecting scrap parts from decommissioned plants to build a Jaeger of her own.  Jake (Boyega) is the son of a high ranking general but instead of following his father’s footsteps, he’s turned to a rebellious life of crime.

Both are arrested and both end up in a Jaeger pilot academy situated in China.  It’s at this point where they meet Nate (Eastwood), a respected, diligent pilot with an impressive pedigree.  With the three leading characters introduced, it’s time to get to the crux of the movie.  The nasty Kaiju return via unusual means, take control of drone-piloted Jaegers, and try to use them against the human population.  There are more deaths, more destruction and more battles to be won.

My thumbs were up following the first movie but my reaction is more subdued this time around.  It’s chaos without tension.  Buildings are blown up and thousands of people run around as the big robot fights take place.  The work of the sound and visual effects teams is to be admired but with so many unnecessary subplots and very little in the way of strong character development, I cared less about how things would transpire.

The film could have been improved with more comedy and whilst the likeable Charlie Day reprises his role as a kooky scientist, his efforts at winning laughs fall flat.  No one else picks up the slack.  The end result is a movie that’s heavy on loud, in-you-face action and light on everything else.